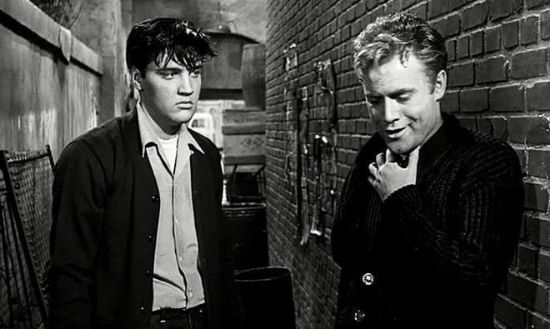 Elvis Presley was not much of an actor, and I've not been much of a fan of his movie work.

I've actually only seen some of the hokier stuff from the '60s, "Viva Las Vegas" and such, which was rapidly-produced pop junk built around Presley's rock 'n' roll persona. "Girls, fast cars and some tunes" was the credo. It was less filmmaking than "marketing synergy" before they had a name for that, his movies bolstering his singing career and vice-versa, keeping him top-of-the-bill status even as the longhairs passed him by musically.

I think it's one of his best because it wasn't conceived as a "Hey, let's make an Elvis movie" project. Having a legendary director like Michael Curtiz ("Casablanca") at the helm doesn't hurt, either. It was shot on an incredibly fast schedule (even by Elvis standards) of just seven weeks, owing to the fact Presley received his draft notice and got a 60-day deferment from the Army to complete the picture.

Based on a novel by Harold Robbins about a teenage boxing sensation pressured by the mob, the movie was actually developed for James Dean before he was killed in 1955. They switched the setting from New York to New Orleans and boxing to singing, and Curtiz insisted upon shooting in black-and-white with a heavy film noir shading, courtesy of cinematographer Russell Harlan ("Blackboard Jungle"), six times an Oscar nominee without winning.

The screen adaptation was by Herbert Baker, who'd worked on a previous Elvis picture, "Loving You," and Michael V. Gazzo, completing his second and last feature film script before moving on to a second career as an actor including playing frickin' Frankie "Five Angels" Pentangeli himself in "The Godfather Part II," and how the crap did I not know that already?

The story setup is a classic "boy from nothing hits the big time and is tempted by corruption of the soul" tale. Danny Fisher is a high-school dropout working as a busboy in one of the Bourbon Street saloons owned by local big man Maxie Fields, who he's never even met. On a dare he gets on stage and belts one out, becoming an overnight singing sensation.

He has daddy issues, vowing never to be a meek sheep like his old man, and is balancing romances between a nice girl and a gun moll. Danny gets squeezed hard by the crimelord and his thugs and is forced into bad choices he'll soon regret.

The supporting cast is simply delish. Maxie is played by Walter Matthau, growly and commanding. Carolyn Jones has a pathetic but alluring pull as Ronnie, Maxie's wastrel mistress/pawn. Dean Jagger, often a cowboy or soldier, plays Danny's pathetic dad, a widower pharmacist who can't keep a job. Vic Morrow, one of those actors you think couldn't possibly have ever been young, has sly charm as Shark, the hoodlum whose blond pompadour is nearly as impressive as Elvis' jet black one.

(Interesting aside: Elvis had naturally sandy blond hair, dying it with shoe polish before getting famous enough for professional color jobs. As the self-appointed Grand Vizier of Cinematic Blondness, I hereby claim Presley for our team.)

Dolores Hart, who also played an Elvis love interest in "Loving You," her film debut, is Nellie, the virginal five-and-dime shopgirl Danny falls for in between being tempted by the older, worldier (read: easy) Ronnie. Hart was pegged as the next Grace Kelly, making 10 pictures in five years before shocking Hollywood by abruptly quitting acting just as Kelly did, only in her case to become a nun instead of a princess.

(More interesting asides: the story of Hart's life was told in the 2011 documentary short, "God Is the Bigger Elvis," which got an Oscar nomination. She attended the 2012 Academy Awards ceremony in full black-and-white habit; the last time she had strolled that red carpet was in 1959.)

Other cast members include Jan Shepard as Danny's long-suffering older sister, Mimi, forced to take on the role of mother after their own passed away. She later falls for Charlie LeGrand, the twice-her-age owner of the titular club played by Paul Stewart. Charlie is pretty much the only guy in Nawlins not under Maxie's thumb, and sees Danny as a way to rejuvenate the failing King Creole.

The movie falls into a pretty steady rhythm of one song every 12 to 15 minutes or so, so there's a pretty decent collection of soundtrack tunes. None of them really stood out to me, though "Hard Headed Woman" hit the top of the charts. Performing as Danny, Elvis does a somewhat understated version of his singular stage routine, a little bit of shakin' but not any egregious pelvis-ing.

I was interested that Danny starts out being backed by bands comprised mostly of African-American jazz musicians, but by the time he's ensconced as the main attraction at the King Creole they've all mysteriously turned white. Perhaps some additional credence for charges of cultural appropriation by rockers, laid out starkly onscreen.

Danny's dynamic with women is... a bit disturbing. On his first date with Nellie, he fools her into thinking he's taking her to a party, when really it's a ruse to get her alone in a seedy hotel room and pressure her into sex. Weirdly, despite seeing right through the ploy she tells him she's still willing to go along, so ensorceled is she by his hunka-hunka burnin' love vibe.

It seems clear they're both virgins, and Danny quickly apologizes for trying to act like the street rat everyone treats him as. From there they have a pretty typical chaste screen romance.

I should mention Nellie first met him when Danny and Shark worked in cahoots to rob her store. They run a couple of jobs together, first on their own then later at Maxie's behest. The latter includes walloping Danny's dad while taking the deposit to the bank, initially thinking it was his father's overbearing boss at the pharmacy. This requires an expensive brain surgery, which Maxie pays for, putting Danny further under his screw.

If the pairing with Nellie is uncomfortable, the one with Ronnie is positively loathsome. She's probably only a few years older but seems worn down as if by decades of abuse, burying herself in drink and self-loathing. She wears an old-school Louise Brooks bob hairstyle, with big pleading eyes and a cynically turned mouth.

Technically she's Maxie's girlfriend, but men like him have little use for women beyond sex, so he's happy to loan her out to his friends or use Ronnie as bait for dumb fish like Danny. They share an early flirtation where he rescues her from some drunks and she makes a pass at him -- while dropping him off at his high school! -- and Maxie, recognizing the attraction, uses her to manipulate Danny.

She's not an innocent by any stretch. In one scene where Danny is forcibly brought to Maxie's place for a meeting, it's clearly a set-up to get him to sleep with Ronnie. She tells him this outright, but uses her victimhood as a weapon, pleading with Danny to stay a few hours to prevent punishment from Maxie.

Ronnie saves Danny's bacon in the end after he's hunted and stabbed by Shark and the rest of Maxie's thugs, driving him to a beach house getaway to get bandaged up and consummate their love without the taint of the city. Of course, the place belongs to Maxie, so he soon shows up for revenge, accidentally shooting Ronnie so she can die in Danny's arms and free him up to return to Nellie.

Elvis did not have the most expressive face in the world, and I noticed that virtually every actor in the movie gets plenty of close-ups from Curtiz other than the star of the show. Still, he's able to put some genuine emotion into his voice and body language that makes us feel for Danny.

I was quite taken with the gloomy sense of doom that feels woven into the very DNA of "King Creole." If it had been made a few years later I think Danny would've been more of an antihero character who winds up perishing in the end, a lesson about the consequence of giving into temptation.

But for an Elvis movie that's only partially an "Elvis movie," "King Creole" stands up well to the test of time. Put it this way: I think it'd be a very watchable picture even if it didn't feature him.