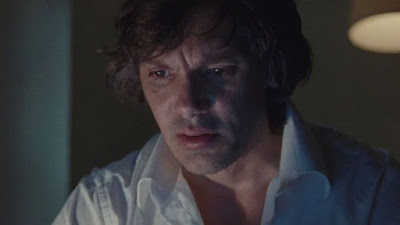 Lukas Haas plays Richard Coleman, a nebbishy nobody sliding through life in "Browse," a psychological thriller with modern skew.

Richard seems to exist entirely through his devices. At home he talks aloud to one of those services that links your phone, email, home security, lights, etc. He's always on the web or watching something. There's nobody around to tell him to take a screen break.

He seems like a nice enough guy, not terribly invested in his job or relationships, using online dating services for casual flings. When that's not enough, the woman in the apartment upstairs is available for booty calls; they literally signal each other by knocking on the floor or ceiling.

Stable but lonely is how most would describe him. With his longish, graying hair and big sleepy brown eyes, Haas has an empathetic presence as a guy who seems unmoored from his own existence.

Then Richard starts to experience an increasingly Kafka-esque intrusion into his privacy. His ex-wife, Roxy (Jocelin Donahue), complains of receiving incessant phone calls from him, even though he hasn't made any. (Though he thinks about her plenty.)

Veronica (Chloe Bridges), one of the women he's been e-flirting with and who lives in an apartment across the way, flags comments he never made on her photos as inappropriate. Eventually the cops come calling.

Things at work quickly deteriorate. He finds some young techie messing around with his computer, and wonders if his troubles are related. His boss (Ken Kirby) is an insufferable young jerk, dismissing Richard with shushes and hand waves while demanding he cut people from his team like punching cattle. One that's been targeted (Sarah Rafferty) is apparently his only friend, and whispers about nefarious deeds their boss is into.

Back at his apartment, the neurotic building manager, Kyle (Bodhi Elfman), always seems to be in Richard's business, relating lewd stories about his love life and expecting the same in return. Meanwhile, he forgets to mention things like Richard's auto-deposit rent payments being overdue or the people from the rental insurance place making similar complaints.

Things go from there, with the consequences getting increasingly dire. It's clear that someone is out to set Richard up as an online creep, rather than the victim of identity theft. (Inexplicably, he never complains to the authorities or asks for help.)

Or is he really a target? Director Mike Testin and screenwriter Mario Carvalhal layer in some scenes, fairly late in the game, suggesting that maybe Richard isn't as benign as he seems. Has he really been harassing these women all along and just blocked it out? Is it mental illness rather than a nefarious plot by invisible antagonists?

At 84 minutes, "Browse" is one of the rare movies these days I wish was a little longer. It doesn't really get deep into its own sense of intrigue until after the one-hour mark, and then it feels like a harried rush to the end credits.

It seems like there's a lot of unexplored territory about Richard's voyeurism -- taking pictures a la "Rear Window" -- and how our digitized interactions heighten the sense of being disconnected. Is the person you're talking to through a dating app really who they say they are? Are you? Can we even tell the difference anymore?

Interesting topics to think about, and largely ignored in hewing to a standardized horror/thriller tropes. "Browse" feels like a Christopher Nolan movie in the larval stage, before all the mind-twisty stuff is properly woven in.

Posted by Christopher Lloyd at 2:04 PM