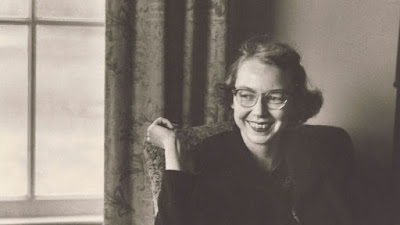 It can be a little off-putting when someone is described as "the greatest writer of the 20th century," and you've never even heard of them.

But maybe it's not surprising that Flannery O'Connor's name is not known further than it is. She was only active for a decade-and-a-half, publishing two novels and about 30 short stories before her untimely death at age 39 in 1964 owing to a long struggle with lupus. She spent most of her adult life on crunches, only leaving her mother's Georgia farm to attend Catholic Mass every morning.

I've not read any of her writing, so I can't say if the aspirational valedictory given her (by Tommy Lee Jones, no less) is true. I will say that "Flannery," the probing documentary about her life and work, is a true joy to behold.

Written and directed by Elizabeth Coffman and Mark Bosco, the film uses Mary Steenburgen's voice in place of Flannery's, which was a wonderful choice. (A few recordings of her contemporaneous readings and appearances show what a good match it is.) If you've ever spent time in the South you'll appreciate the rolling cadences and lilting signs of exasperation of a woman who was proudly an iconoclast but would never think of behaving in a tawdry or impolite manner.

Flannery was a woman of deep faith in God, which she wrestled with in her writings and in her vibrant correspondence with others (which was published posthumously). She loved flawed, even reprehensible characters who she could hold up for observation or ridicule. Her stories were serious and satirical, filled with the grotesque and violent, people who killed wantonly or (barely) harbored deeply hateful beliefs.

In essence, Flannery saw herself as a chronicler of the South, and did not blink from its racism and depravity while also stubbornly cherishing the foibles and grace of its living characters. Today, her unblinking portraiture and not-infrequent use of the n-word put her at risk of being labeled "problematic" -- the pedant's phrase for their own inability to measure passing of time and culture.

The film has lavish interviews with many of the people Flannery knew or worked with, as well as modern academics and writers who have discovered or rediscovered her work. Among them are Sally Fitzgerald, Tobias Wolff, Alice Walker, Hilton Als and Conan O'Brien.

And there's the usual biography fare. We learn of Flannery's upbringing, high in gentility but low in funds, her early loss of an encouraging father and a frigid -- but stable -- relationship with a mother who clearly would rather've had a daughter who was less talented but prettier.

There is her correspondence with a lesbian friend at a time when such things could threaten one's livelihood and even life; her refusal to meet with James Baldwin because she knew such an encounter with the fiery thinker/activist would imperil her ability to be a chronicler of her home state; brief dalliance with anti-Communism as a young writer-in-residence; and brief romantic overture with a foreign book salesman who would later show up in her next book in a less-than-flattering light.

(Ever the proper lady, Flannery laughed off such insinuations in a letter to the gentleman, even though anyone with an eye and a heart can see they were so.)

One of O'Connor's books, "Wise Blood," was turned into a 1979 feature film directed by John Huston and nine stories became short films or TV episodes. Another feature, an adaptation of "A Good Man Is Hard to Find," is in pre-production.

As a newspaper features editor I often said that the measure of a good food story was that it made you want to eat after reading it. Certainly "Flannery" has left me hungry to consume the writing of this troubled, joyous writer.

Flannery Trailer from Elizabeth Coffman on Vimeo.
Posted by Christopher Lloyd at 3:36 PM