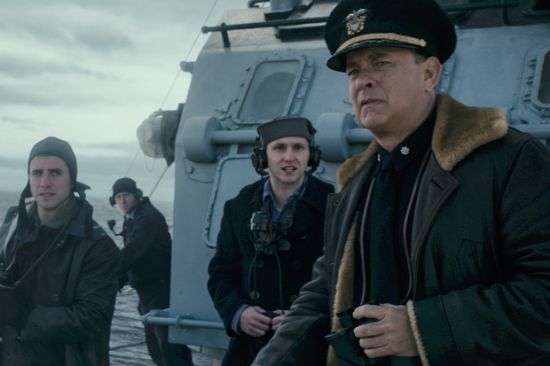 "Greyhound" yearns for the big screen. What better illustration of the majesty and power of cinema than a top-drawer war adventure I had to watch on my laptop with earbuds instead of a huge canvas and surround sound. This is film you need to be enveloped by to properly experience.

How much we have given up, 'going to the movies' being nowhere near the most important -- but also not the least.

Tom Hanks stars and, for just the second time in his career, wrote the screenplay based on the novel "The Good Shepherd" by C.S. Forester. This film was supposed to hit theaters on June 12, but instead of pushing it back to the fall or next year like so many other big-ticket movies, Sony opted to sell it to Apple TV+. So that's where you'll see it if you want to.

And you will want to, if you're in the mood for an old-fashioned, magnificent war story about sacrifice, vigilance and humility. These virtues, once so universally embraced as not needing to be voiced, seem positively quaint these days or even, if you're so inclined, reactionary.

Directed skillfully by Aaron Schneider, "Greyhound" is one of those fictional tales with the weight of authenticity in its bones. Set in early 1942 as America's entry into World War II mostly consisted of picking up the pieces in the Pacific and Atlantic oceans, it's the tale of Ernest Krause, a freshly minted destroyer commander escorting a group of 37 ships to England. These badly needed troops and supplies make up the very lifeblood of the sputtering fight against Hitler's horde.

Yes, Hanks is a bit old for this role, though there's some hint in an early scene with his would-be fiancee (Elisabeth Shue) that he's a Navy career man who's been continually passed over for command. There's a sense of a man whose life has passed him by, finally given a chance to prove his mettle in the final minutes of a long game.

At a taut 91 minutes, "Greyhound" is like the titular wiry canines, all leaned out and built for speed. It jumps right into the action and never lets up as the convoy is hunted by a pack of German U-boats over the course of several days. This takes place in the "Black Pit" of the Atlantic where American air support has turned back and the British planes are still too far away.

The Germans know it, too, patiently waiting at a distance for the night to fall, just like the wolves from which they take their names. At several points the enemy commander breaks into their comms line, taunting them with their impending deaths and literally howling with bloodlust.

And there is Hanks, a stolid presence every step of the way. His Krause refuses to leave the bridge, even when his feet swell up and start bleeding, daring hardly even to take a bit of food. There's a nearly silent understanding between him and the head chef (the always terrific Rob Morgan), the latter bringing meals he knows will not be eaten, yet always sharing a quick prayer to bless the untasted sustenance.

Stephen Graham plays the XO, the captain's right-hand man, who spends most of his time in the bowels of the weapons room, yet always figuratively at his side. The rest of the cast are mostly younger men whose characters' names we barely catch, greenhorns looking to their leader for reassurance and stability. Among them are Manuel Garcia-Rulfo, Devin Druid, Lee Norris, Karl Glusman, Tom Brittney and Joseph Poliquin.

There's the sonar technician, always in his own little bubble of headphones, listening to the sounds of the sea and trying to pick out the plinks and tremors that indicate an enemy. Or the ever-present radio man whose job is to follow the captain around like a herald, relaying his orders to whatever station needs to hear them.

The sea battles are largely accomplished with CGI, and while you can see the artifice if you look for it, I soon stopped doing so as we're swept up in the story. Most of the action takes place during frigid, stormy seas, the skies a nightmare swirl of monochrome and the ocean a frightening, ever-shifting landscape of potential threats just below the surface.

Torpedoes are dodged, depth charges dropped, submarines forced to the surface and thundering deck guns barking at each other. Thrilling, absolutely thrilling.

Despite watching "Greyhound" on a crimped platform, I still was completely swept away by it. Here is a movie that transports us back to a time of quiet heroism, when the line between good and bad seemed starker and our collective duty was clear.