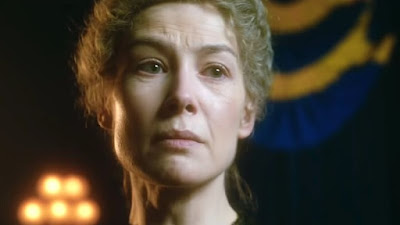 Rosamund Pike plays Curie, the famed French – actually, born in Poland as Maria Sklodowska – scientist who along with her husband Pierre Curie (Sam Riley) pioneered the research of radioactivity, i.e. the process by which unstable matter decays and gives off energy.

Directed by Marjane Satrapi (“Persepolis”) from a screenplay by Jack Thorne (based on a book by Lauren Redniss), “Radioactive” plays out as a standard “great man/woman” film. We are astounded at the massive accomplishments of one person while learning about the personal challenges that nearly kept them from historic achievement.

Certainly, Curie’s bona fides for notoriety are indisputable: first woman to win the Nobel Prize, shared with her husband and fellow physicist, she matched that a few years later by becoming the first person to win a second Nobel in a different field, chemistry. She was the first female professor at the University of Paris, discovered two new elements for the Periodic Table and pioneered the use of X-ray machines on the battlefield of World War I, saving countless lives and limbs.

Curie is, quite literally, in the Panthéon of greatness.

The story starts with Curie’s death – likely due to radiation poisoning, as thousands of chucklers have loved to joke. Both Curies unwittingly received massive doses of harmful energy during their years of experimentation. Only later did they learn about people who had partaken of the benefits of their research who were developing tumors or anemia.

This is the sort of movie where the star is wheeled into the hospital in copious stippling makeup to make her look older, and the head physician loudly exclaims: “But this is Madame Curie!!” Everything in the story feels twice underlined as if we were missing how this is all Much Importance.

The portrait that emerges is of a headstrong woman who put her science first, but nevertheless found true love with Pierre. Early on she loses her place in the university laboratory due to sexist pig-headedness, and he offers Marie a spot in his. Despite their promise not to share experiments or beds, they soon do.

Pierre died in 1906 in a street accident, and for a time Curie found herself buffeted by oppressive forces from French society – especially when she took up with her younger, married colleague, Paul Langevin (Aneurin Barnard). She was even accused of being a foreign collaborator and a Jew to boot.

The film loses juice in the second half after being sustained by Curie’s relationship with Pierre. It is interesting to see a portrait of historical marriage in which the woman is clearly the dominant force. At one point she even coldly informs him, “My mind is finer.”

Once that cycle of magnetic attraction and repulsion is over, though, the story seems to bleed energy with an astonishingly short half-life. Anya Taylor-Joy briefly shows up too late as Curie’s now-adult daughter, Irene. (Who would later go on to win her own Nobel in conjunction with her husband/collaborator.)

There are a few dream-like sequences set in the future where we see the consequences of Curie’s discoveries, such as a crippled boy receiving radiation treatment or an atomic bomb test in 1960s America. The movie tries too hard to convince us of the monumental consequence of this life, as if Marie Curie were a name wholly unknown.

Pity that “Radioactive” didn’t better take to heart the lessons of its subject, and shown a little more enthusiasm for experimentation.