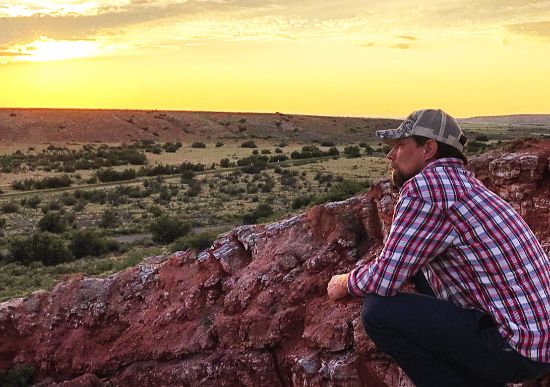 Carl Merryweather isn't the sort of guy most people give a second glance to. He looks like just another ballcap-wearing, tattooed blue-collar dude you see tooling around in a beat-up pickup truck with a bunch of junk in the bed.

He's the sort of guy you get to come to your house to fix your tractor-mower, is nimble around machines, but when he talks you can't help notice his speech is a little on the slow side.

Nowadays his fixed stare and trouble following social cues would get him labeled as "on the spectrum" if he were still in school. But Carl is honing in on 40 and has something special planned for his birthday. He wants to recreate the experience he had in Apple Valley, Calif., when he was 10 years old and had an encounter with an extraterrestrial creature.

Yes, you heard me: Carl literally believes he's going to meet aliens in the desert outside Los Angeles.

That's the premise of "Skyman," a documentary that really isn't. Carl is actually a character played by actor Michael Selle, and his story is fiction. But it's told in an engaging scripted form that makes it all quite authentic -- and often unnerving.

If you're thinking to yourself, "That sounds like a UFO version of 'The Blair Witch Project,'" then your instincts are very good. Writer/director Daniel Myrick was one of the key figures behind that seminal 1999 horror film, and uses many of the same storytelling techniques here to similar effect.

"Skyman" has an eerie way of passively creeping under your skin and making you doubt the things you thought you knew.

(Disclaimer: I ran in the same circles as the BWP gang back in our Orlando days and slightly knew Myrick -- mostly extending to losing to him in foosball, if memory serves.)

Nicolette Sweeney plays Gina Campbell, Carl's younger sister. She loves her brother dearly while recognizing he's always been a little odd. Gina is single, divorced and two semesters from getting her nursing degree; she's the sort of woman who can still smile at life despite being worn down by it. She and Carl have a relationship where they can kid each other about the other's foibles while being ready to fiercely defend them against interlopers.

Their dad, a military careerist who flew choppers in Vietnam, died some years ago and their mother is confined to a nursing home after a stroke. Carl hasn't told his mom about his birthday plans because he believes there's a chance he may not return if the encounter is successful, if that's the right word for it.

Beneath his bumpkin-ish exterior lurks a sharp mind. Carl is a talented artist, finishes crossword puzzles in minutes and intuitively grasps any technology he encounters. His childhood and more recent drawings of the "skyman," as he dubbed it, depict a very tall, thin creature with triangle-shaped head. It spoke to him through telepathic images, and now he's convinced he's being told of their imminent return.

A great many people in Apple Valley reported the same UFO sighting he did 30 years ago, so it seems he can't just have imagined it. But while most folks dismissed the event as a fleeting anomaly, it literally took over Carl's life. He's collected every magazine or book about alien encounters and knows the lore inside and out.

Most of what's out there is BS, Carl knows, but somewhere in the fog of fiction are a few nuggets of real data that he chases like a stubborn bloodhound. One scene shows him going to a UFO convention and asking the recognized experts on the subject the sort of questions that make them stop and think, "OK, this guy may be legit."

But to most, Carl is just a benignly odd guy, the sort who can't keep a job very long and mostly stays to himself. He spends much of his time at the High Ground House, or HGH, which is basically a fallout shelter his dad established in the middle of the desert. It consists of a couple of Chinese storage containers retrofitted into a living space and assorted detritus.

The family spent a lot of time out here camping when they were kids, and it's where Carl had his encounter. To most an absolutely barren stretch of desolation, it's the one place he seems truly at home.

Pretty much the only other important figure in the story is Marcus (Faleolo Alailima), a mellow childhood friend of Carl's who now works in the hardware store where he picks up all his gear. Marcus rolls his eyes at some of Carl's behavior when he's not looking, but he's enough of a friend to accompany Carl and Gina out to the HGH and rig up the area with cameras to record any events.

We don't know what's going to happen, but we know it'll be... something.

In the end, "Skyman" is less about aliens from outer space than the inner space of the people who are obsessed with them. Is Carl's UFO encounter just a delusion of a childlike mind that never really grew up, or an actual event that holds the potential to be reprised?

Myrick teases us with the answer, and the notion that there even is one. And therein lies this film's considerable, disquieting appeal.