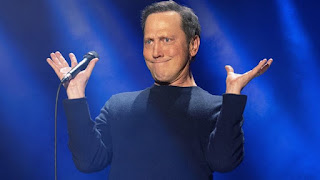 
He says this without a scintilla of resentment or regret. Rob Schneider is older, lumpier, possibly wiser, and most certainly funnier than he's been in years.

He shows all this off in his new Netflix comedy special, "Rob Schneider: Asian Momma, Mexican Kids," a meditation on aging and looking back on a career that, by his own admission, has cooled. And he seems fine with that.


Schneider looks more like Billy Crystal than Deuce Bigalow these days. And yes, he still dallies in "problematic" spheres of comedy, enshrining male lust and ethnic speech patterns. He just does it in the slightly more apologetic way of aging men who have come to terms with the fact they aren't cool anymore.

I've never had a very strong impression of Schneider. I liked him in his "Saturday Night Live" days, and I remember he would sing on some of the Christmas specials, imitating Elvis or what have you. He went onto a solo film career of comedies ranging from lowbrow to awful.

Schneider seemed like a guy smart enough to know his movies weren't very good, and he got quite thin-skinned and defensive about it. I recall he once publicly attacked a Los Angeles critic who trashed his latest flick in a huge ad he took out, which prompted Roger Ebert to respond with a scathing column that ended with, "Your movie sucks."

This later became the title of one of Ebert's collections of reviews.

This helped take the knees out of Schneider's star wattage, leading to leading roles in smaller movies and then supporting parts in other people's movies. For awhile he was part of the Adam Sandler "make work" projects for his buddies, notably "Grown Ups," but found himself left out of the sequel -- reputedly due to "scheduling conflicts," which is the Hollywood-ese equivalent to the corporate world's "spend more time with his family."

Schneider didn't even get to ride the "Hotel Transylvania" gravy train, and he's mostly done bit parts and voice work the last decade. Let's be blunt: he's a has-been.

"Asian Momma" reflects his acknowledgement of this fact, which at times takes on the tone of a confessional of the sniggering schoolboy who has grown up but still can't help cutting up.

I learned some things about him. Starting with the fact his eldest child is in fact Elle King, a crooner with a magnificently soulful voice. After his stand-up set Schneider brings her out for a duet of Roy Orbison's "In Dreams" that is achingly haunting but also joyful. It's the first time they've ever performed together in public, he says.

I also discovered that Rob Schneider is Asian-American. No, really. His wife is Filipina and his repertoire of various Asian accents of English are collected from his childhood; he even breaks out in Cantonese at one point. He mimics his mother's constant demands for straight A's in schools and hectoring ways.

"It's not racist. It's accurate," he semi-apologizes after one long screed. He jokes that in the Great Awokening, he may be Asian but he's not Asian enough to get any jobs out of it.

Much of the second half of his set is devoted to Schneider's third marriage and two young children, ages 3 and 7. They've been married 10 years and he's lived in constant fear that she will divorce him. We understand why. Her Mexican accent gets its own parody-slash-pedestal, going through a long routine of pestering his wife for sex and getting shut down.

It's an old, familiar tune sung by many a comedian, but Schneider puts his own naughty-boy spin on it. I laughed plentifully, at first sympathetically and then genuinely.

There's also a brief moment of sober lucidity where he defends himself as mate, even though he's probably shorter, less handsome and (now) less of a celebrity than she might have once hoped.

"Maybe I am your Prince Charming," he insists, a joke with a bedrock of self-awareness.

Yes, Rob Schneider spent much of his lifetime scraping the bottom of the comedy barrel. He knows that now, even if he's not taking any of it back. The funny has not fled him.

Even if his movies did indeed suck, a third act to redeem the second seems not unreasonable.

Posted by Christopher Lloyd at 12:59 PM