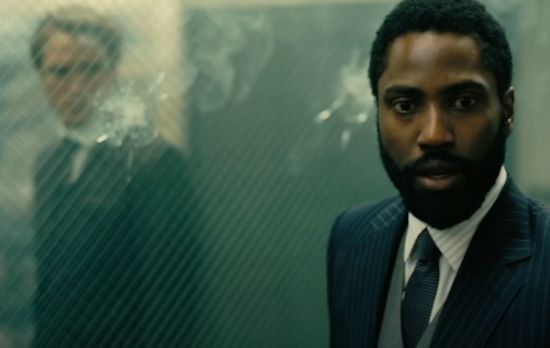 This is what we waited almost half a year for? After seeing the entire spring and summer movie season swallowed by -- well, you know -- it was finally time for some big-budget, big-name movie-making.

And my first trip to a movie theater in six months.

High hopes? Yes, certainly up there. Admittedly, probably, a bit too high. But this? This?

Nolan’s newest is a great big catastrophic mess. How messy? We’re talking toeing the line on sheer incomprehensibility, and often juking gleefully over the edge.

If you had trouble understanding “Memento,” then this movie is the “Hold my beer.”

“Tenet” is a strange, strange bird. It’s got tons of dialogue, long winding scenes of people jabbering away about inversion and freeports and grandfather paradoxes and plutonium 241 and Goya paintings and a bunch of other stuff.

And you. Cannot. Understand it. At all.

There are several reasons why. Primarily the over-complicated plot in which some evil mastermind wants to end the world using time travel. Well, not traveling through time per se, but reversing time. So objects and, eventually, people can actually move through time in opposite directions. More on that in a bit.

Then there’s Nolan’s well-documented penchant for having sound effects and thundering music drowning out the dialogue. (Ludwig Göransson subs in for Nolan’s pet composer, Hans Zimmer, though based on the thundering bass and dissonant chords, it’s mimicry rather than departure.)

And we have a sprawling international cast using all sorts of accent flavors, often spoken rapidly and underneath their full breath. There’s Kenneth Branagh’s vowel-twisting Russian arms dealer, Sator, who is (we think) the chief villain. And his kept wife, Kat (Elizabeth Debicki), in clipped high-class British tones. And a warbling Indian power broker (Dimple Kapadia).

Heck, Michael Caine turns up for a bit, and he’s the most comprehensible of the lot.

Here’s how the movie plays out: there will be an exciting but bizarre action scene. Then a whole bunch of talking to explain what just happened. Then a bunch more talking to set up the next set-piece. But we can’t understand the talking, so we have to amble our way through the chases and explosions, trying so hard to make sense of what we’re seeing it carries no emotional weight.

Because it’s Christopher Nolan, the movie is sleek and shiny and moves well. Some of the bang-bang scenes play quite nicely, including a heist of a MacGuffin from a moving truck using a variety of other trucks. And a bungee-cord assault on a skyscraper.

Branagh brings genuine menace as a controlling monster who keeps his wife pressed beneath his very thumb. This, despite the fact the stork-like Debecki towers above him, and everyone else for that matter. She resembles a normal woman whom God stretched out like taffy.

“Tenet” is not actually the name of Washington’s character, who simply calls himself The Protagonist. As the story opens he has just passed a particularly cruel test to be admitted to the top echelon of spydom and entrusted with this Most Important Mission. Robert Pattinson plays Neil, a smirking playboy wingman who can pick the locks of a lot of closed doors. He’s got foppy hair and a floppy lilt. (Again, hard to make out.)

The science is left deliberately fuzzy, something to do with a nuclear blast inverting the flow of electrons so the object moves backward rather than forward in time, I think. So a bullet hole will appear before the gun has been fired, and so on.

This results in decidedly weird, borderline comical combat scenes in which one person is moving forward in time and the other in reverse. It’s a lot of fumbling around and actions that miss the mark wildly; reminds me of my early love life. Eventually we get entire battles scenes of this.

Everything’s so utterly serious in “Tenet,” as if the movie can’t see itself and grasp how ridiculous it is. “We’re living in a twilight world” is a passcode some of the spies use when they find themselves in a situation where they’re unsure of what’s what, and boy do I know how that feels.