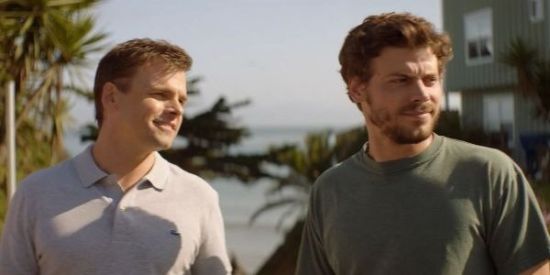 Wes is usually the guy who's the villain in movies, or at least the smarmy foil for the likable main character.

He's a rich corporate A-type personality who's charismatic, glib, a handsome elbow-bender and ear-whisperer. He always seems to have a drink in his hand and a shit-eating grin on his face, and never appreciates what he has in life, always looking for something else to feed a need he himself can't explain.

So it's interesting to see him as one of the main characters, and actually written and played with nuance and subtlety. He's one half of the duo in "She's in Portland," the story of two college buddies who go on a road trip/love quest that ends up being much more about assessing where they are than where they're heading.

As played by Tommy Dewey, Wes is a young executive in some ambiguous high-finance enterprise who doesn't know how good he has it. He's one of Tom Wolfe's "Masters of the Universe" with a palatial house, a beautiful wife (Minka Kelly) and toddler daughter, and everything in his life is pointing to an upward arc. And yet, he's unhappy.

The exact source of his malaise is unclear. He doesn't like his omnipresent in-laws and his marriage has settled into that phase where you're more partners in a daycare business venture than ardent lovers.

At a college reunion he runs into Molly, the girl his best friend, Luke (François Arnaud), was infatuated with back in school and gets an idea. He'll fly out to Los Angeles, where Luke is a struggling video editor, and they'll take a trip up the Pacific Coast Highway to see her in Portland, stopping along the way for a business deal he has in Frisco.

Mostly, though, it's a chance to reconnect, bond over past experiences and raise questions they're afraid to answer on their own as they eyeball middle age on the near horizon.

This is a splendidly well-acted and observant film. Usually in low-budget indies like this you'll see a lot of amateurish acting in the smaller supporting roles, but here everyone we meet feels authentic and like they're exactly in the place they should be. Director Marc Carlini, who wrote the script with Patrick Alexander, shows a sure hand despite it being his first stint in the big chair of a feature film.

This is the sort of movie where not a lot "happens" but everything that does seems pivotal and life-changing. Wes, who has stashed a gob of cash in an envelope, buys a vintage Ford Bronco just for this trip, and they make all sorts of side stops -- some of them planned, some of them not.

They visit their old campus at UC Santa and play the role of aging Lotharios partying it up and hitting on girls. Curiously, although Wes is a natural flirt and Luke is more the quiet brooding type, he sticks to his marriage vows while Luke plays around as opportunities present.

Along the way they encounter three pairs of women: one much younger (Medalion Rahimi and Olivia Crocicchia), one a bit older (Joelle Carter and Lola Glaudini) and the last one Luke calls "not a detour, just a wrong turn." Each time the men try to impress and end up being the ones who receive an education, for good or for bad.

Wes and Luke's relationship is one of give and take, trade-offs and compromises. Each to an extent envies the other, while also resenting them a bit. Wes wants Luke's freedom and creativity and Luke covets Wes' material success and stability.

Wes has come to Cali on a quest to "save" his friend, but it soon becomes clear he's the one who needs help. He's not really capable of asking for it, so he disguises his vulnerability in a manipulative sort of beneficence.

The production values are very good, from the lush cinematography by Devin Whetstone to the musical score by the Mondo Boys, an empathetic mix of classic melodies and atonal moods.

"She's in Portland" is the sort of ride you maybe don't look forward to, but once you're on the road you don't have anywhere else you want to be.

Posted by Christopher Lloyd at 3:58 PM