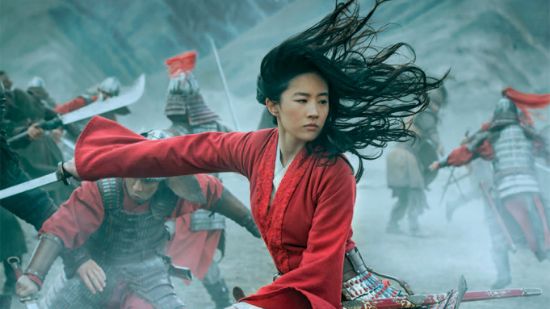 “Mulan” is by my lights the weakest of the modern Disney animated films, possibly challenged by “Pocahontas” as the House of Mouse went through a period where it seemed more interested in depicting and attracting underrepresented populations than actually spinning a good yarn.

Now everything cartoon shall be remade live action (and probably back again another generation down the line). I’m pleased to see the new “Mulan” made a better impression on me than the last, though it’s still plagued by some drab performances and the common ailment these days of being 15-20 minutes too long.

Based on ancient Chinese folklore, this is the story of a young woman who overcame tradition and societal pressure to become a great warrior-hero who saved the kingdom. In that day only boys took up their fathers’ sword and girls existed to be matched up and married off.  A son who died in war lived on in honor, but a daughter who does not comport herself in a mild, subservient way brought shame to her family.

It’s got a ton of action scenes and is surprisingly rated PG-13, though probably closer to PG than R. There’s too much parkour-type stuff for my taste -- people flipping sideways through the air and running up walls and such -- but I’m impressed by the sheer scale of the choreography and pageantry, which is positively Kurosawa-esque at times.

Mulan (Liu Yifei) is the eldest daughter of Hua Zhou (Tzi Ma), a crippled war hero. He has raised her tacitly encouraging her rambunctiousness and proclivity toward combat. But now that she’s old enough to marry, Mulan is nothing but an embarrassment to her mother (Rosalind Chao).

Then a threat comes to the kingdom in the form of Bori Khan (Jason Scott Lee, unrecognizable under a mask of scars), a Genghis Khan-type raider seeking revenge against the Emperor (Jet Li), who killed his father. Every family is required to volunteer one male as military conscript, and since Zhou has no sons and is in no condition to fight, Mulan sneaks off with his sword and armor, passing herself off as a man.

Things go through a pretty predictable cycle: she struggles to fit in with the other recruits, particularly Chen Honghui (Yoson An), an aggressive-in-a-dreamy-sort-of-way type. Mulan endears herself to her commander, Tung (Donnie Yen), as the best fighter in the division, though her deception weighs upon her conscious and the three tenets of the warrior ethos: loyalty, bravery and truth.

One of the most interesting changes from the animated movie is the addition of the character Xian Lang (Gong Li), a powerful witch who fights on behalf of Khan. She can transform into a hawk or swarm of bats, and even enter another person’s consciousness to control them for at time.

Of course the women clash in combat, but also reveal themselves as kindred spirits who are ostracized for stepping out of the accepted roles for women. Lang tells Mulan she is poisoning her chi, or life energy, by denying her feminine identity.

Directed by New Zealander Niki Caro (“Whale Rider”) from a script by Lauren Hynek, Rick Jaffa, Elizabeth Martin and Armanda Silver, “Mulan” carries the torch of feminism proudly though in a decidedly non-threatening way. All the men who sneer at Mulan, before and after she her impersonation is revealed, are just converts waiting to happen.

Liu’s performance is a bit flat and emotionally vacant. We don’t really feel the agony of her estrangement or the fierce pride that would lead someone like Mulan to be such a barrier-breaker. It’s just a lot of blank expressions and stunts.

Yet, I’ll admit I like this version of “Mulan” more than the cartoon one. There’s no silly talking animal sidekicks (sorry, Eddie Murphy) or concessions to a kiddie audience. You may find that smaller children have less patience for this version, but adults will respond with more enthusiasm than the original.

Posted by Christopher Lloyd at 9:00 AM