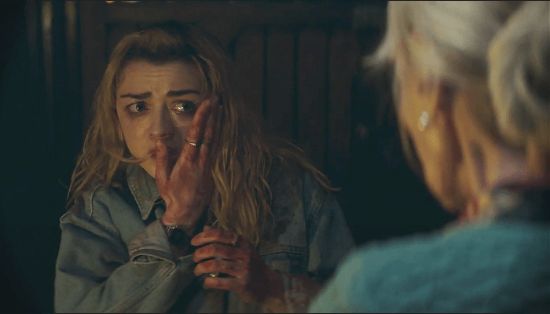 Youth is wasted on the young, or so they say, and horror films are sometimes spent trying to scare people too inured to easily experience genuine fright. The latter would certainly describe me and my reaction to "The Owners."

This is a well-done British horror flick that held zero surprises for me. Well, there was one, to be entirely truthful, though I have to say it left me more confused than scared. Scratching your head and going "wwwwhhhhhaaaaat?" is never a good place to be in this genre.

The film stars Maisie Williams of "Game of Thrones" fame in a story about a bunch of lower-class hoodlums breaking into the mansion of a wealthy elderly couple and finding a whole lot more than they bargained. It's supposed to be a burglary, but when they can't get into the safe they decide to wait until the oldsters come home and browbeat them into opening it up.

Needless to say, things do not go as planned, and soon enough recriminations and bloody mayhem ensue.

The best part is the early middle, a high-tension sequence that takes place in the basement where loyalties are strained and the owners turn out to be much more resourceful than you'd expect from a pair of octogenarians. I'm reminded of the torture scene in "Reservoir Dogs," where we have a pretty good idea where things are going to spin out but it's a nail-biting affair getting there.

(I was watching this part late last night when my wife came into our bedroom and thought I was having convulsions. This is another downside of watching movies on your computer, because nobody can see you squirm in a darkened theater.)

From there, things move upstairs and become less interesting as it goes along. It morphs into a cat-and-mouse game as Mary, the main character played by Williams, gradually figures out that the owners aren't nearly as harmless and benevolent as they'd initially seemed. Roles are reversed, with the intrigue all taking place inside a confined space.

Sylvester McCoy plays Dr. Huggins, the man of the house, and I knew I recognized his high-pitched, kindly brogue from somewhere, and it was as Radagast the Brown in the Lord of the Rings movies. Dressed in a bow tie and three-piece suit with owlish classes, Huggins seems like a harmless, sweet-natured man of science who cares deeply for his wife.

Ellen Huggins, for her part, is suffering from dementia and often seems more as a child than an old woman. Played by Rita Tushingham, Ellen surprises us with flashes of anger and steely resolve that bespeak of a woman who was once the feared mistress of the house. She's particularly annoyed by things that are dirty, and apparently this includes many people.

Mary was not even part of the group that broke in, but came along afterward at the behest of her boyfriend, Nathan (Ian Kenny). He's bemused by how much power he has over her, though later his quest for quick cash takes on a more urgent note. His boyhood chum, Terry (Andrew Ellis), is the timid, dim type who clued them into the opportunity because his mum does maid work for the Hugginses.

The malevolent X-factor is Gaz, the sidekick who appears to be the one really in charge. Played with chilling conviction by Jake Curran, Gaz is all tall angles and fair hues; he seems like an angel who fell to earth and was bent up into unspeakable shapes. He seems to have an innate sense for how to push people's buttons and probe their weak spots.

For example, Gaz quickly figures out that while Dr. Huggins may not give the combination to the safe willingly, he'll do so if the one thing in the world he dotes on is threatened, that being his wife. I'll say no more.

Julius Berg directed and co-wrote (with Mathieu Gompel) the film, his first feature, based on a French graphic novel. He seems to have a good feel for pacing and tone, which are some of the more nuanced aspects of filmmaking. Though I think he's restricted by the bookends of the horror genre, which tend to shut out any storytelling aspects that aren't aimed at eliciting scares.

It's a solid performance for Williams, making that awkward transition from kid to adult actor. Like a lot of female characters in horror, she's a fairly undefined, weak-willed person who defers to others, but when imperiled finds inner stores of resolve even she didn't know were there.

The good parts of "The Owners" are quite good, though the obligatory stuff is there to be endured.