Review: "On the Rocks" 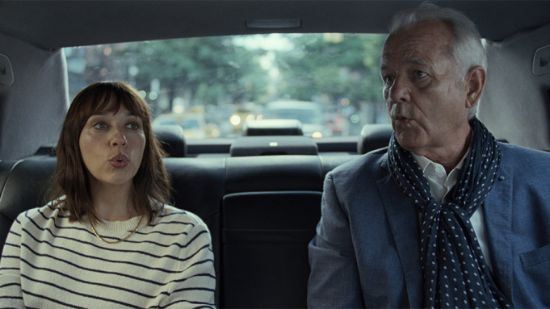 Sofia Coppola's "On the Rocks" is filled with great ideas and penetrating questions about life, love, and men and women that the movie itself doesn't do a particularly good job of exploring. It's like a fantastic gift box from someone you adore, and then you open it and what's inside is a little disappointing but man, what wrapping! And the thought!

The film will generate a lot of interest for Coppola's reuniting with Bill Murray for the first time since "Lost in Translation," which if you can believe it was 17 years ago and doesn't that make us all feel old, except for Scarlett Johansson who was so young then she's still a youngster. There are some similarities between Murray's characters as older, charismatic men who act like they've got all the answers but are just dealing with their hangups and insecurities eating them from inside like everybody else.

Coppola and Murray do seem to share some kind of psychic bond beyond the normal writer-director/muse dynamic. Murray is so smooth and comfortable as Felix, a semi-retired art dealer whose entire life seems to consist of having lunches at swanky New York clubs, wearing splendid suits even though he probably hasn't gone into an office since the '80s, dropping in at parties and riding around in his Mercedes -- chauffeured, of course, because who can be bothered with all that parking and driving when you can sit in the back and practice your whistling?

Felix isn't even the main character, just the dad to the real protagonist, Laura, played with a depth and a weary unease by Rashida Jones that stands in contrast to Felix's lackadaisical glibness. The setup is that Laura begins to suspect that her husband, Dean (Marlon Wayans), is having an affair, she mentions this to Felix, who warns her about the straying ways inherent to all men and boy howdy does he know from cheating, and off they go on a rockheaded Nancy Drew investigation into the matter themselves.

You can probably guess where this leads, and I certainly did: laughs, tears, recriminations, lovable hijinks, confrontation and an ending you can see coming an hour off but still lands with a solid emotional smack.

This is one of those "I loved spending time with these characters" film. It winds itself up and you know exactly where it's going, and then it gets there and you're sort of like, "Yeah, saw that coming." But you still appreciate the trip from here to there.

Felix saunters in and out of the story, and any scene he's in is a winner and most scenes he's not you're checking your watch -- those're timey things we used to wear on our wrists, kids -- wondering when he'll be back. The high point is a purportedly clandestine street stakeout in a cherry red Karmann Ghia ragtop complete with caviar snacks, binoculars and a blinky starter motor.

Then the cops show up and... well, you'll see, but only Felix can be Felix.

For her part, Laura has what seems like one of those blissful Big Apple marriages: Dean is head of charging tech start-up, they live in a fabulous expansive brownstone that has more commas in the price than most New Yorkers have bedrooms, and have two thoroughly adorable daughters. (In the tradition of all Hollywood movies, the kids are around just long enough to demonstrate that the parents feel harried but disappear for long stretches whenever the adults want to do some adulting, which is to say most of the time.)

Laura is a writer who has already sold her book but finds she can't write a single word, what with writer's block and all. That's a thing that only happens to people already rich enough that they can dilly and dally for weeks or months on end and there's nobody to tell them to stop talking on the phone with their friends about how much they can't write and put some goddamn words down or no paycheck-y come Friday.

(I'm writing this after 10 hours at my day job in the twilight glow between making everyone's dinners and before the dog starts scratching on my leg for a walk before dark, in case you wants a nice little compare/contrast. #$@&%*! "writer's block"...)

Felix leads Laura through a set of adventures that seem designed as much to rekindle their relationship as find out the truth about Dean. Felix walked out on Laura's mom and has all sorts of theories about how men are genetically programmed to need to sleep with lots of women, which he'll happily espouse out loud at length while casting moony glances across the room.

I think part of Felix knows his shtick is grotesque to 97% of women, but he's happy to keep aiming fire at the other 3.

Can I also just say I hate, hate, hated the character of Dean? He's literally always away on business or working until late at night and is the sort of guy who thinks of himself as a wonderful husband and father but really he's just about the worst there is just north of outright abusive. He makes goofy faces with the kids for a few minutes before leaving for his next stretch of days that he's gone, and doesn't help one bit with getting them dressed or picking up around the house even while he's there.

They say 90% of life is just showing up, and if that's true for being a real man then Dean will never make the grade even with a generous curve. Strangely, Coppola gives him something of a pass, happy to empty her quiver at the scampy Felix but holding fire for Mr. I'll Skype with You Tomorrow.

This film feels like mid-career Woody Allen with its uniquely New York characters, settings and problems. It's filled with people who are so wrapped in a sense of entitlement they aren't even aware of the concept of being entitled.

At one point Felix insists they pop in at his downstairs neighbor's party because "she has Twombly" and I thought that was some sort of expensive whiskey because that's another thing Felix is into but it's one of those painters you're supposed to pretend you know. I'm just an air freight agent's son who couldn't tell the difference between pricey hooch and moderately aged varnish and knows a little about art but not enough to care who Twombly is.

(Correction: who Twombly was, I just Googled and he's dead.)

It's weird. I definitely felt let down after finishing "On the Rocks" but now I've sort of talked myself into liking it again. Like Felix, it'll probably let you down but be thoroughly charming while getting there.

Posted by Christopher Lloyd at 6:30 AM