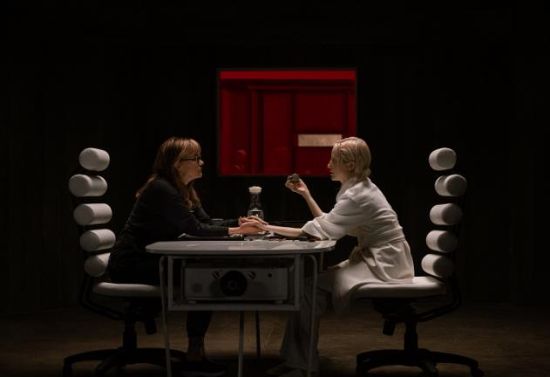 I'm a hi-lo man when it comes to horror. I grew up on the stuff, a true devotee devouring gory zombie flicks before I had down-there hairs. This continued into adulthood, but somewhere around 2000 either I changed or the fright flicks did, and horror films haven't held the same appeal for me since.

It's strange because a lot of horror diehards believe we're in the middle of the genre's golden age, with a lot of popular stuff going straight to video or niche streaming services along with a few high-profile theatrical flicks everyone insisted were so good and so scary where I was firmly ensconced in Meh-town.

"Heritage?" "Midsommar?" I didn't even so much as twitch an eyelid.

But "Possessor?" Yeah, this movie creeped me the hell out.

It's written and directed by Brandon Cronenberg, a family name that is like the Cartier of scare flicks. Daddy David specialized in mind-twisty frightful films ("Videodrone," "Scanners") where our conception of reality was as much threatened as the characters' lives. "Possessor" is thoroughly of that bloodline, something that feels like it was hatched out of the mind of sci-fi pessimist Philip K. Dick ("Blade Runner").

Note: the film is being distributed with an "Uncut" suffix as if to suggest there was a previous, tamer version of the film (of which I'm unaware). It's not being released with an MPAA rating but would surely be NC-17 if it were, with hard-to-look-at violence, nudity and porn-adjacent activity.

The high/low concept is that assassins are recruited to invade the minds of an innocent victim through a neural link inserted in their brain and then use them as avatars to kill high-price targets with no risk to themselves. The possessor then has the host kill themselves, at which time they return to their own body and consciousness.

To the rest of the world, it seems like a random murder-suicide rather than an orchestrated hit.

We see one of these to start the story, as dolled-up female entertainers enter a high-roller club, and one of them (Gabrielle Graham) plunges a knife into a lawyer somebody must really hate. And then she does it again, and again, and again, and many more agains. But it turns out the possessor isn't able to pull the trigger on her (borrowed) self, nearly fouling up the job.

This is Tasya Vos, played by Andrea Riseborough, the proverbial best of the best. Outwardly, she seems like an icy blonde but, as we shall see, there are cracks in her facade as a remorseless killer.

Her handler, Girder (Jennifer Jason Leigh), treats Tasya almost like an adopted daughter, and is even grooming her to be her own replacement. Though Girder is a little worried Tasya's personal life is intruding on her work -- really best to snip out those pesky distractions like a husband (Raoul Bhaneja) and son (Gage Graham-Arbuthnot).

Tasya has moved out of her home but clearly the pull to return is strong.

They've got a big job up next: taking out an egomaniac billionaire -- is there any other kind, apart from maybe Warren Buffett? -- named  Parse, played with delicious snarl by Sean Bean. The "in" is his wayward son-in-law-to-be, a former drug dealer named Colin (Christopher Abbott) who fell in love with one of his clients, Parse's daughter Ava (Tuppence Middleton).

Colin sort of reminds me of a young Richard Gere -- a low, impenetrable wall of wavy hair, slim almost boyish build, and a beautiful but bland face that needs some time and creases to give it  character. He could be on the cover of a magazine and yet you might walk right by him if you saw him on the street.

He also seems to be stronger-willed than anyone thought, and Tasya has to fight for control of the body, both before and after the deed. (Which is horrifyingly grisly, in how it happens and the ultimate outcome.) Girder scrambles to pull her top agent out, knowing that permanent brain damage has already occurred and will worsen the longer she's trapped inside Colin.

The special effect used to portray the possession is both novel and unnerving, as Tasya's face dissolves like melting wax and then is reconstituted into Colin's features. When things go wrong it becomes like a terrifying, half-formed mask they're both forced to wear.

This isn't really a deep character study, and yet we find ourselves closely identifying with both Tasya and her host. We desperately want her to get out of the body she's trapped in and we'd also like it so that somehow Colin doesn't wind up dead or in prison.

That's a nifty trick to pull off for a filmmaker, to have the audience feel empathy for both the murderer and the victim. Thought he lines are a bit hard to draw, as both learn unpleasant things about themselves they'd rather not know.

"Possessor" is the rare modern horror movie that truly gets under your skin and is content to stay there, like happily burrowing worms.

Posted by Christopher Lloyd at 7:46 PM