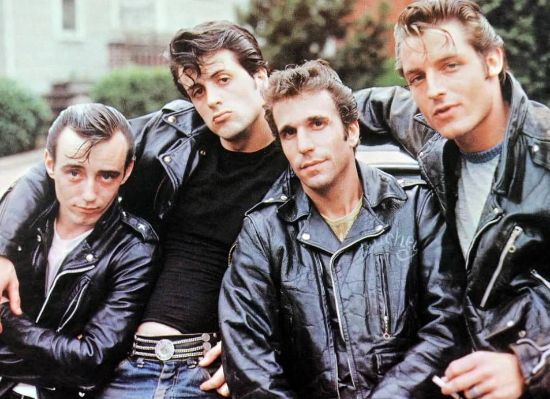 I figure it this way: the more maps you read, the more you know about where you want to go."
--Stanley Rosiello


It's curious that by the early 1970s there was already an intense nostalgia for the 1950s and early '60s, at least if you looked at film and television representations.

Having just come through arguably the most intense cultural upheaval in American history, audiences seemed to crave a return to the relative calm of a half a generation earlier, when getting a switchblade pulled on you was about the worst thing you could expect if you wandered into a big city.

"The Lords of Flatbush," chronicling the coming-of-age of four Brooklyn toughs, came out a year after "American Graffiti" but failed to make the kind of impact George Lucas' film did -- though it turns out to be important in other ways, helping launch the careers of a number of notable people.

Among them was Martin Davidson, who directed along with Stephen Verona, the pair writing the script in conjunction with Gayle Gleckler (her only credit). They also had some dialogue contributions from Sylvester Stallone, who starred along with Perry King, Paul Mace and Henry Winkler.

Making his directorial debut, Davidson seemed to embrace nostalgia as his niche, going on to direct "Almost Summer," which helped jump-start the bawdy teen comedy genre, and "Eddie and the Cruisers," set in the same era as "Flatbush" and with a similar surfeit of leather jackets and greasy hair.

It was Stallone's second starring role in a film, and he would have supporting or bit roles in "Capone," "The Prisoner of Second Avenue, " "Death Race 2000," "Farewell, My Lovely" and "Cannonball!" before his breakout in "Rocky" two years later. He makes quite an impression as Stanley, the surly alpha male leader of the Lords, a "social athletic club" aka street gang.

Burly, bordering on chubby, Stallone turned 28 the year the film came out playing a high school senior. Winkler would be 29, King 26 and Mace the relative youngster at 24. Just to show that the Hollywood habit of casting actors in their mid- to late-20s as teens is nothing new. Mace's career didn't last long, but King was a busy actor on TV and film for the next few decades.

Winkler would actually be the first and biggest breakout star of the group before the film even came out, with "Happy Days" debuting a few more months before "Flatbush" hit theaters. By the latter part of the decade it would be the most popular show on television, with Winkler's Fonzie a ubiquitous staple of pop culture.

It was perhaps the earliest known example of the "Urkel Effect," where a supporting player becomes so popular they essentially take over the show -- to the point the ostensible main character, Ron Howard's Ritchie Cunningham, eventually left "Happy Days" and no one really cared. Of course, the Fonz is known for his raging machismo, but in the movie Winkler's character, Butchey Weinstein, is the smart-aleck clown of the group.

He gets one nice scene in the soda whop where they congregate, mouthing off, ordering egg creams, practice a little doo-wop and occasionally arguing and fighting. The jaded counter worker offers Butchey some advice, telling him he's got brains but is too stupid to use them, which Butchey sarcastically promises to take to heart.

What you may not know is that another future star was slated to be in this movie: Richard Gere was cast in King's role as Chico, the amorously inclined member of the gang, but was fired during rehearsals when he and Stallone clashed. Supposedly the two still bear hard feelings from those days.

Story-wise... there really isn't any. At 86 minutes, "Flatbush" is a very observational, slice-of-life film without a lot of narrative. It's essentially a progression of encounters with the foursome, each getting a little bit of solo time for their own story. Chico and Stanley get the lion's share with their romantic adventures.

Chico carries on with Annie (Reneé Paris), one of the girls who runs with the Lords, while pining for Jane (Susan Blakely), the wholesome girl-next-door type who recently started at their high school. Chico seems to enjoy mocking Jane even as he woos her, wanting only to get into her pants so he can move on to the next conquest.

We suspect he has genuine feelings for her, or at least could grow to develop them if his stubborn self-image as a loverboy would let him. She puts him off, he blows her off and claims not to care, until Jane starts dating Arnie (Frank Stiefel), who has a car. This leads to a whole sequence where the Lords steal a 1956 Packard for Chico to use on dates with Jane.

Interestingly, Arnie is sort of a quasi-official member of the Lords, and actually takes Chico's place for the singing scene because he's off canoodling with Jane or Annie or whoever. This doesn't stop them from calling Arnie out to fight near the end because... well, that's just something they do on a regular basis.

The Lords defend their turf, even if they had just previously abandoned it.

The tone for the film is set in an early scene were Wimpy (Mace), the diminutive member of the gang, is playing pool with a slightly older guy in a suit. He mentions that he used to be in his own gang, the J's (since they ruled Avenue J). Stanley tries to hustle him in pool and then threatens to beat him up, dismissing the interloper as an "old man." (He's maybe 25).

It's pretty clear what's going on here: this fellow is an affront to the Lords because he grew up and sold out, embracing the conventional life they see as a trap. Secretly Stan keeps pigeons in a rooftop coop and dreams of flying away somewhere -- a soon-to-be standard trope for cinematic tough guys. Deep down, he knows he's not going anywhere.

Certainly not if Frannie (Maria Smith) has anything to say about it. She's been Stanley's sorta-girlfriend for awhile, and early on we learn she's pregnant. Frannie pushes Stan toward marriage, which he resists mightily but also with a sense of an inescapable doom. But Frannie wants to be married straight out of high school, so married she will be, with Stanley as her first -- but hardly last -- choice.

They'll fight and say the most horrible things to each other, and as soon as Stanley relents a little bit, Frannie and Annie (who is her best friend and wing-woman) shower him with praise. The best example is a visit to a jeweler (played by Davidson himself) to buy a 1½ karat engagement ring for $1,600.

That's almost nine grand in today's dollars, and we can see the panic in Stanley's eyes when he's presented with a figure that represents many times his net worth. Offered a consignment purchase, he might as well have shackles presented to him. It's not a payment plan, it's mortgaging his future.

Stan bobs and waves, asks if they can rent the ring for 10 days, is bombarded with screeches of protest from Fr/Annie, and finally gives in, offering up everything he's got, $90.

Of course, he then immediately makes a big show of being the king of the walk, accepting congratulations from the rest of the Lords. The film ends with their wedding, something Stanley was fully hornswoggled into, since Frannie's pregnancy turned out to be a bogus ploy. The marriage won't possibly last past their 30th birthdays, but he must now make a show of embracing it, even claiming the whole thing was his idea all along.

In the end, I don't really know what "The Lords of Flatbush" is trying to accomplish. It seems like the barest sketch of something bigger and deeper, like the first rough draft of a Scorsese film. Seen today, it was an opportunity for actors to swagger and mug for the camera and hope it'll lead to something bigger -- which, for most of them, it surely did.