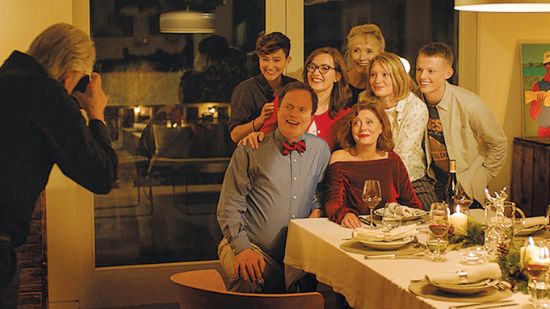 "You didn't raise us to be strong. You just raised us not to bother you with weakness!"
--Anna

"Blackbird" is one of those rare movies that held few surprises for me, but I still embraced every moment I spent with it.
It's very much an "actors' film," without any real plot other than a bunch of characters getting together, interacting and reacting. It's remade from a Danish film by Billie August (unseen by me), directed by Roger Michell ("Notting Hill") from a script by Christian Torpe.
The cast is terrific, and it's a movie that's warmhearted but not without considerable tension and pain.
It stars Susan Sarandon, still luminous at 73, as a woman named Lily who is dying. She has some sort of degenerative disease that will eventually leave her unable to walk, talk or even breathe on her own, so she has decided to hurry things along by undertaking physician-assisted suicide, which in her case the doctor also being her husband, Paul (Sam Neill).
Lily and Paul have let everyone know their plans and have gathered their extended family to their beach house for one last weekend of togetherness and goodbyes. After they leave Sunday evening, she will drink something Paul has prepared for her and let go. It's her (fiercely defended) choice.
Of course, the weekend will not proceed with utter tranquility. There are built-up tensions with their two daughters, well-played by Kate Winslet and Mia Wasikowska, and within their own family units, that will come out and spark arguments and recriminations.
You can feel the slow-burn buildup to these outbreaks coming a long way off. And yet, strangely, the moments never felt artificial or hurried. They seemed more like the revolutions of the tide, which comes rolling in whether you want it to or not.
Lily is the clear alpha in the family, a woman who doesn't necessarily like to be the center of attention but absolutely insists on being the center of power. Paul seems content to adore her, support her and take a back seat to the interpersonal dynamics.
Lily has a good heart but often doesn't see how her desire for things to be a certain way can cause them to go astray. She has a tendency to delude herself, insisting things are as she wants them to be rather than the way they really turned out.
Michell starts off shooting mostly from medium distance, slowly bringing the camera closer to the actors' faces as the story goes on. I knew that Winslet was in this movie and kept waiting for her to show up, and I think was 30 minutes in before I realized older daughter Jennifer was her. Somehow her ponytail, owlish glasses and hard, flat American accent had me completely fooled.
Jennifer has a lot to be thankful for in her life, but instead obsesses with "straightening the picture frames," as someone aptly puts it. She's very critical of everyone, including herself, and can't seem to just sit back and let the sun shine in.
Her husband, Michael (Rainn Wilson), is likeable but diffident, the kind of guy who tends to have his nose buried in a newspaper or book, and most of his conversations with other people have a "did you know?" hook to them. He's not showing off, but this is how he gets around his awkwardness.
Their son, Jonathan (Anson Boon), is about 16 and just starting to spread his wings. He wants to be an actor, but has never even told his parents about it. He often acts as the audience's eyes and ears.
The other daughter, Anna (Wasikowska), is the black sheep of the family. She's had trouble keeping a job or a relationship, and often drops out of communication for long stretches. Anna shows up with her girlfriend, Chris (Bex Taylor-Klaus), in tow, which causes consternation because Jennifer asked that she not be brought.
Apparently they've broken up and gotten back together several times, and Chris is seen as a destabilizing force on Anna's life. Though we'll see how true that is.
Finally there's Liz (Lindsay Duncan), Lily's lifelong best friend who has been riding along with the family on vacations, get-togethers, and so on for decades. She doesn't have a lot to say or do, but we suspect she will factor into matters more deeply as things go on.
As I say, there isn't really a whole lot of storytelling here. There's the Friday arrivals, Saturday activities followed by a big dinner, and the Sunday dénouement. At first the main conflict is between the sisters, but it migrates around so that virtually every relationships is revealed and tested in some way.
I'll say I pretty much knew everything that was going to occur before it did. (Watch hundreds of movies a year, and you will, too.) But again, the strength of a film like this is not "what happens" but the how and the why.
Sarandon is such a treasure, always interesting to watch even in movies that don't hold much appeal on their own. I liked seeing Winslet in such an emotionally pinched role; we're used to seeing her as women throwing around big emotions. I really took pleasure in Wilson, so identified with his iconic character from "The Office," getting a chance to show his dramatic chops.
Movies like "Blackbird" are not about big surprises, but how the patterns of life that become stable and familiar are vulnerable to disruption and being upended -- and that's not a bad thing. At the every end of her life, Lily knows who she is and what her life has been about, and wants to say goodbye on her own terms. So do we all.

Posted by Christopher Lloyd at 12:40 PM