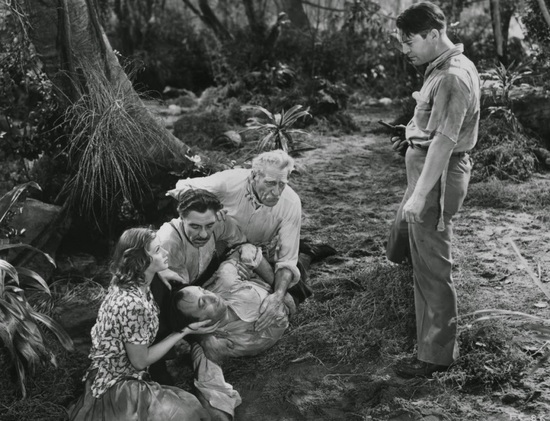 "Five Came Back" is not to be confused with the 2017 Netflix documentary series about five noted Hollywood filmmakers who made propaganda movies for the U.S. government during World War II. It's a 1939 harrowing adventure story about a dozen people whose plane crashes in the Amazon and they have to struggle to survive while hashing out various interpersonal relationships and clashes.

The premise reminded me a lot of "Flight of the Phoenix," one of my dad's favorites, so I was eager to check it out.

It's a prototypical B-picture with some solid talent behind it. One of the screenwriters (along with Jerry Cady and Nathanael West) was legendary script man Dalton Trumbo. Director John Farrow helmed some notable pictures, including the film noir classic "The Big Clock," which was later remade into "No Way Out."

Farrow also won an Oscar for his screenplay of "Around the World in 80 Days" -- which is actually better than it's given credit for, though still a solid contender for the title of "Worst Best Picture."

The cast of "Five" included iconic "that guy" character actor John Carradine, with his signature scarecrow frame and scowl, who went on to sire an entire dynasty of thespians.

And it was one of the biggest early screen roles for Lucille Ball, before she switched to comedy and conquered television. She plays Peggy, a classic screen type: hard-bitten moll who's had all sorts of troubles with men, and finds herself judged by the high-class types.

Carradine is Crimp -- great name, that -- a "detective" who's really a glorified bounty hunter. He's got a $5,000 claim on Vasquez (Joseph Calleia), an anarchist who's being extradited back to Panama to be executed for his role in the assassination of a government official. That's about 90,000 smackers in today's dollars, so he's very keen on making the plane to Panama City.

Vasquez turns out to be very cagey, managing to swipe Crimp's gun away from him while being processed at the police station. In many ways he's the central character of the story, a man who's committed despicable acts yet winds up as the figure with the largest accrual of moral authority.

Chester Morris plays Bill, the thick-necked and, initially, thick-headed captain who continues to lead the party after the crash due to engine failure. Peggy takes a shine to him, though his hard heart takes some convincing. Rakish copilot Joe (Kent Brooks) has eyes for one of the passengers, Alice (Wendy Barrie), who's the secretary to wealthy heir Judson Ellis (Patric Knowles).

It's eventually revealed they're eloping together to escape the media glare and disapproval of their parents. Judson turns out to be, along with Crimp, the least adaptable of the survivors, quickly taking to drink -- he's got an entire suitcase packed with booze -- and despair.

Dick Hogan is Larry, the steward who's sucked out the door during the crash. (Blond guys always bite it early in adventure movies.) Casey Johnson plays Tommy, a little boy of about 3 who is the son of a mob leader on the run. Allen Jenkins plays Pete, the gun tough charged with protecting the tyke.

When the passengers (prior to the crash) hear a news account that Tommy's dad has been gunned down, the group takes on a sort of collective parenting of the boy. At first Pete won't let Peggy play mother to him, but eventually she proves her mettle.

The flight scenes are certainly a relic of their times, both for the crudity of the not-so-special effects -- their plane, The Silver Queen, looks like a child's model (and not an expensive one) -- and the depiction of air travel in the 1930s. People move about the cabin freely, the booze flows just the same, and there's no lock on the door to the cockpit, which is invaded several times by passengers.

The by-today's-standards huge chairs include a fold-down bed for each person. Joe has a pervy scene where he responds to Alice's buzzer about a stuck ventilator by flirting and invading her personal space.

The scenes on the ground are also a bit funny in their near-total avoidance of verisimilitude. Other than Bill's sleeves becoming ripped to reveal his thick arms, nobody's attire changes considerably despite weeks on the ground in stifling jungle heat. I lol'd several times at the women clip-clopping around the underbrush in their high heels. The men don't even take off their suit jackets the first few days.

Despite crash-landing in the trees (without the landing gear down), Bill and Joe commence with making repairs, this being the day when the sky jockeys who drove the planes apparently were all expert mechanics, too. They somehow manage to clear hundreds of yards of jungle for a runway with improvised tools.

But it all comes down to the proverbial "too much weight," so in the end they have to decide who goes and who stays -- after their numbers have been sufficiently thinned by the heard-but-never-seen cannibals, of course.

Some of the story plays out with predictable precision. Like the evolution by which Alice realizes Judson is no good and gloms onto the creepy-but-noble Joe. And the way Crimp and Judson both seem determined to have run-ins with the other men, so it's only a matter of time before they square off with each other.

In a hoot-worthy example of inept stunt choreography, during their fight Carradine actually starts falling backward before Knowles' mimed punch comes anywhere near him.

But I appreciated the unexpected cerebral and emotional portions of the story. The Spenglers find themselves coming to appreciate Vasquez, who points out that while the others are desperate to escape back to their lives, his destination lies with a hangman's noose. Without the headhunter subplot, my guess is he would have chosen to stay behind, assuming he escapes Crimp's greedy clutches.

In the end it's Vasquez who is allowed to decide which five people will get to ride away on the plane. Though his choices are pretty unoriginal -- two pairs of lovebirds and a kid -- the way he arrives at them hold genuine tension and intrigue.

"Five Came Back" is the sort of largely forgotten picture that strives beyond the shortcomings of its B-picture entertainment value and delivers a memorable experience.