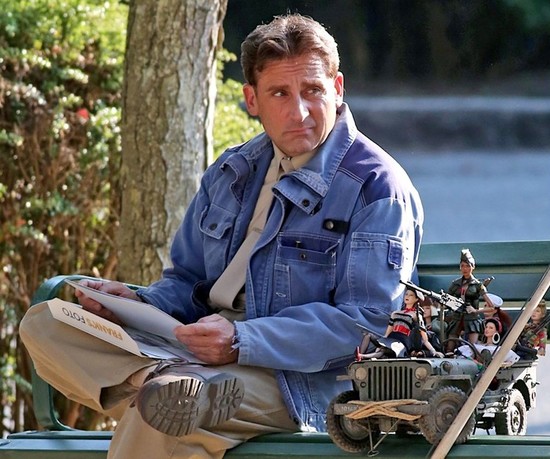 Every now and then, audiences and critics just plain get one wrong.

“Welcome to Marwen” was a complete box office bomb, grossing $10 million against a $39 budget. It currently has an abysmal 33 percent score on the Tomatometer -- about half that of the ludicrous Liam-Neeson-as-a-vengeful-snowplow-driver thriller, “Cold Pursuit.”

It came out for the Christmas rush and was promptly swallowed by “Aquaman,” “Mary Poppins Returns” and other blockbuster releases. Despite some big names being involved, including star Steve Carell and director/co-writer Robert Zemeckis, “Marwen” has essentially been memory-holed.

I urge you to go check it out on Blu-ray/DVD or streaming. It’s a wonderfully offbeat film -- funny and sad, grounded and giddy. It might be too weird for some people’s tastes, but for those who like unconventional storytelling it’s a true treat.

Carell plays Mark Hogancamp, an artist who was brutally beaten by a gang of men at bar because they thought he was gay. He isn’t, but Mark does like to wear ladies’ shoes, which apparently was enough reason. His injuries left him unable to draw, as well as wiping clean most of his memories prior to the attack.

His hobby-slash-obsession involves the creation of a model-scale fictional town in Belgium during the days of World War II. Mark populates the village with doll-side versions of himself and his female friends. Collectively they are freedom fighters taking on the evil Nazis.

These sequences are rendered in CGI with a cartoony, surreal quality that nonetheless packs a lot of emotional punch. Mark photographs the vignettes, which usually involve his character being tortured, as a sort of oddball personal therapy.

Now a major exhibition of Mark’s work is about to go on display, and he’s expected to testify in court for the sentencing of his attackers. He’s terribly anxious about both, as well as the arrival of an enticing new neighbor (Leslie Mann) across the street.

Yes, “Welcome to Marwen” may seem like a real head-scratcher at first. But it’s filled with so many wonderful things, especially Carell’s sensitive performance as a strange man with off-kilter impulses but a true heart.

Take a chance, and you might just find yourself bedazzled by this quirky jewel.

Bonus features are adqueate. They include deleted scenes and the following documentary shorts: “Marwen's Citizens,”  “A Visionary Director,” “Building Marwen” and  “Living Dolls.”