Review: "The Curse of La Llorona" 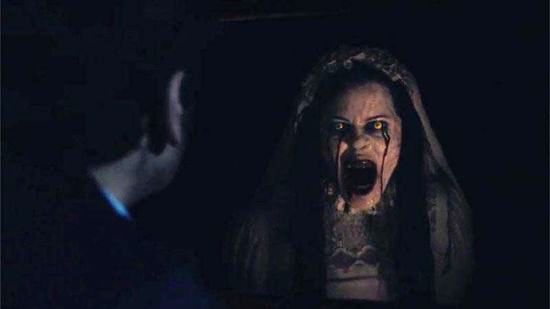 I was genuinely creeped out by “The Curse of La Llorona.” I’m an old-school horror fan from way back who has generally been unimpressed by modern scare flicks, which all seem to substitute jump-scares for tension and foreboding. “Llorona” employs a few of those, but judiciously and skillfully.

While this isn’t by any means a “hard R” gross-out gorefest, it’s got enough of the ol’ ultra-violence to whet the appetite for those who have one.

The story is based on a famous Mexican folktale about a mother who drowned her own children as retribution for her husband cheating on her. There have supposedly been man sightings of the “weeping woman,” who now wanders the land as a ghost bringing misfortune to those who encounter her.

For the movie version, this mythology gets woven into the existing world of “The Conjuring” movies, a vastly-expanding horror franchise with multiple sequels and spinoffs. Set in 1973 Los Angeles, it does not feature the Warren couple of occult investigators played by Vera Farmiga and Patrick Wilson, although a secondary character, a priest named Father Perez (Tony Amendola), makes an appearance.

“You don’t have to be religious to have faith,” he says. Thanks Father! Now go find something good for stabbing with.

Linda Cardellini plays Anna, a social worker who was widowed about a year ago, leaving her to toil with two kids, Samantha (Jaynee-Lynne Kinchen) and Chris (Roman Christou), who are around 10. Early on she catches a bad case involving a mother, Patricia Alvarez (Patricia Velasquez) who has been keeping her sons locked in a closet.

Anna gets the boys put into protective custody, but they wind up drowned and Patricia curses her to have La Llorona haunt her family next.

Marisol Ramirez plays the creature, and it’s a pretty gnarly get-up: white (wedding?) dress and veil, chalky skin with pitch-black tears eternally streaming down her face, the mouth splitting into a yawning chasm and the hands blackened as if by charring. When she grabs one of her victims, it leaves burn marks.

Apparently there’s a bureaucracy involved in getting the Warrens’ help, so Father Perez hooks Anna up with Rafael Olvera (Raymond Cruz), a former priest turned ghost-hunting shaman. He’s got a dour attitude and a closet full of holy artifacts and potions to fight La Llorona. Wait till you see what he can do with eggs.

I like that the screenplay by Mikki Daughtry and Tobias Iaconis has little to no fat. There are only really three or four setups before we get to the scaring inside the family’s house. Director Michael Chaves keeps things moving nicely, with a minimum of existential pondering and a maximum of eerie weeping lady frights.

Is “The Curse of La Llorona” an especially groundbreaking or original bit of horror? It is not. It relies a little too much on familiar tricks, like the wind that is constantly blowing open doors, windows, etc. and heralding the ghost’s arrival. Somebody needs to keep an eye on the barometric pressure.

But it’s an enjoyable scary flickershow with lots of inky shadows and tense moments. I don’t know why female horror villains are scarier, but they just are.