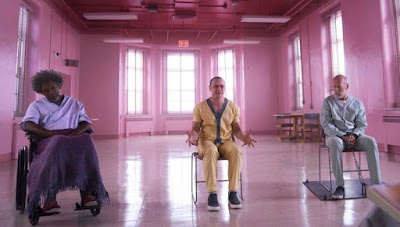 “Glass” was made for $20 million, which must be some sort of low-end record for a modern superhero flick. Heck, I think even Roger Corman’s 1994 version of “Fantastic Four” must’ve cost more.

(Note to editor: this is what’s known as “artistic hyperbole.” Corman never spent more than a quarter-mil on anything. – CL)

To be true, nobody flies through the air or emits energy beams from their eyes or turns into an orange pile of rocks. But that’s really the point of the movie from writer/director M. Night Shyamalan, who with this films wraps up an ad-hoc trilogy that began with 2000’s “Unbreakable.”

“Glass” is less of a straight-up action flick than an exploration of the superhero myth. It posits three men who believe they have extraordinary abilities against a disbelieving world where skepticism and gaslighting reign.

(Another note to editor: “gaslighting” means using trickery to convince someone their beliefs or mindset are unreliable.)

The third wheel – quite literally for the first half of the movie – is Elijah Price (Samuel Jackson), an evil genius who goes by the moniker “Mr. Glass” because of his extraordinarily fragile bones. He’s been incarcerated for the past two decades, sitting in a wheelchair in a seemingly catatonic state.

For a while all three men are jailed and treated by a psychiatrist (Sarah Paulson) who specializes in addressing superhero delusions. Using evidence and therapeutic techniques, she works to convince the trio that they are actually normal humans – because there’s no such thing as superheroes.

We’ll see how that turns out.

“Glass” is a much more cerebral superhero movie than we’re used to, but I think a satisfying one. It takes a few liberties with things that happened in the prior movies, not to mention basic logic. But maybe rearranging reality is Shyamalan’s super-power.

Bonus features are quite extravagant. There are a dozen deleted scenes and an alternate opening. I count another 12 making-of documentary shorts, ranging from the film’s special effects and sound design to early storyboards.

Two of the more interesting are “Glass Decoded,” which unveils some continuity “secrets” of the trilogy, and “Connecting the Glass Universe,” exploring Shyamalan’s concept of a comic book movie grounded in reality.