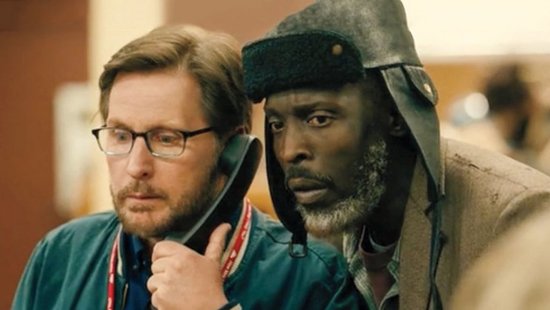 One of the most vicious aspects of Hollywood is how cyclical it is. You can be on top one moment, a nobody seemingly the next. This dynamic is especially cruel to actors, who rely on good looks and vitality more than their behind-the-camera colleagues.

Even those performers who "make it" can often only enjoy a high-profile stint of maybe five to 10 years. In a blink of an eye, you've been relegated to "whatever happened to" status.

Emilio Estevez had about that long of a run, and today's he's known mostly as brother of Charlie or son of Martin. But he's been quietly working this whole time, steadily of not frequently, gradually seguing into producing, directing and writing.

His newest project, and his first acting gig in six years, is "The Public," which he also wrote and directed. It's a heartfelt drama about a meek library worker who finds himself caught up in an ad-hoc protest by homeless men. It's not a great movie, but it's a solid one and worthy of your attention.

He plays Stuart Goodson, a nebbishy supervisor at the downtown Cincinnati public library. Like a lot of big-city libraries or other public institutions, it doubles as a place for the homeless, the elderly and the unwanted to hang out. Some come to read, some to use the computers, many just for a comfy place out of the elements.

Stuart and the other staff take it all in stride -- part knowledge custodian, part social worker. Stuart's coworker on the social studies level is Myra (Jena Malone), a young woman who likes to advocate for environmental causes. They banter playfully if chastely, though there's a tension in that she's continually put in for a transfer to the art and literature department.

Jeffrey Wright plays the boss, Anderson, fretting over budgets and rules. You know he's a tight-ass because he wears a bow tie.

His latest headache is the library is being sued for $750,000 by a mentally ill homeless man who was evicted because of his powerful body odor. The city prosecutor, Josh Davis (Christian Slater), talks down to everyone involved, including Ernesto (Jacob Vargas), who along with Stuart threw the guy out.

Davis is running for mayor, and he gets involved when the homeless men, tired of risking the bitter cold every night when the shelters are full. It's a typical bureaucratic prick role, but Slater has some moves as a privileged man who thinks he's doing the right thing while always keeping his eye on the next job.

(Prosecutors don't actually get involved with civil lawsuits or police hostage negotiations, but I won't quibble.)

The homeless guys aren't looking to do a civil disobedience thing -- it's just damn cold and they don't want anymore of their numbers to freeze to death. They're worked up beacause believe their friend Caesar, who can quote historical trivia all day long, is missing and they fear he's the latest to succumb to the cold. The group is led by Jackson (Michael Kenneth Williams), a veteran who likes to tease Stuart a bit about his bleeding heart.

Alec Baldwin plays Bill Ramstead, the police detective brought in to conduct the negotiations. He's got his own issue with a strung-out son he's been out looking for, and you'd have to be pretty dim to not see that one coming.

Taylor Schilling is Angela, the erstwhile building manager where Stuart lives, the sort of gorgeous women who populate movies and like to put the moves on quiet, introverted men and get them into bed, because that is totally a real thing that happens in life.

The movie strangely loses steam right around the time the protest begins, though things pick up as it goes along and becomes a media sensation. Gabrielle Union plays Rebecca, the TV reporter who only cares about getting a good story, whether or not it's the right one. She plays up the scenario as a hostage situation instead of a bunch of tired, scared men demanding a warm place to sleep.

Stuart throws in with the protesters and gets pegged as the ringleader, so he's the one who negotiates with Ramstead and trades quips with Davis.

The film ends on a strange note, which I'll not reveal here, other than I defy anyone to see it coming. "The Public" is a little bit of "Dog Day Afternoon" meets the Nick Nolte movie "Teachers" and a few other pieces thrown in. It's got a fine cast and a story to tell, and as long as you've got something to say you're never a has-been.