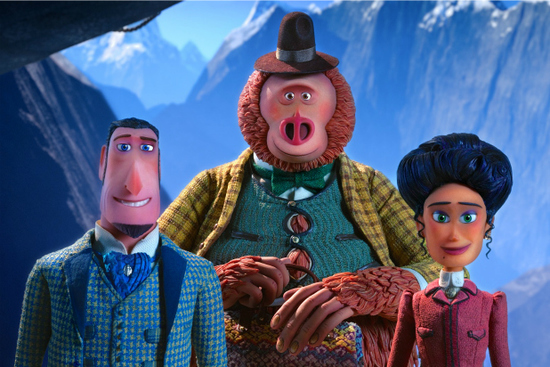 Ten years ago I was amazed by the stop-motion animation film “Coraline” from Laika, stating that it took a practiced eye to even tell it apart from standard animation. The action was so smooth and the world it occupied so vast, it was hard to believe it was made by infinitesimal changes to puppets photographed one frame at a time, 24 per second.

The newest from Laika, “Missing Link,” puts that film’s technical achievements to shame. This movie is so visually stunning that I again watched in disbelief. If not for some making-of sequences over the credits showing the painstaking process of putting it together, I might’ve thought the filmmakers were fudging.

They do use CGI animation for some of the backgrounds, but all the characters, clothes and sets are actually miniatures. Astounding.

Alas, I wish the story was a little stronger. Laika movies have been notable for their darker themes and complex narratives. (See -- especially if you already haven’t -- “Kubo and the Two Strings.”) “Missing Link” follows a rather conventional “finding your own path” story with a bigfoot creature.

Aside from similarities to other cinematic tales of late, including last year’s “Smallfoot” and “Abominable” coming out this September, the story makes the mistake of shunting the bigfoot character to sidekick status and putting all the attention on his human companion, a self-involved British explorer, Sir Lionel Frost, voiced by Hugh Jackman.

I’m reminded of the recent “Dumbo,” in which a bunch of humans took over the tale and the little flying elephant lost the spotlight.

The setup is that Frost has been trying and failing for years to be admitted to an elite club of adventurers, but the nasty leader, Lord Piggot-Dunceb (Stephen Fry), is determined to keep him out. Then Frost receives a letter alerting him to sightings of a bigfoot in the Pacific Northwest of America. This is the discovery that will finally secure his status, he figures.

Finding the bigfoot isn’t a problem -- turns out he wrote the letter himself. Resembling an 8-foot orangutan, the mild-mannered creature is voiced by Zach Galifianakis. As the only one of his kind, he’s always felt terribly alone, and wants to enlist Frost’s help in transporting him to the Himalayas to seek out the yeti, whom he feels are his long-lost cousins.

Dressing him up in a comically undersized suit so he can pass as a man, they refer to him as “Mr. Link,” short for missing link, though he later acquires an unexpected nickname.

Along the way they pick up an antagonist in Willard Stenk -- love that name -- a pint-sized shootist with claw marks across his bald head, and some (reluctant, initially) help in Adelina Fortnight (Zoe Saldana), a vivacious former girlfriend of Frost who holds a map to Shangri-La, where the Yetis reputedly reside.

The basic dynamic is that Frost is a self-centered jerkwad who only thinks of himself and his reputation, rather than relating to Link as a person with feelings and longings of his own. Adelina doesn’t have much to do but point out to Frost his missteps.

Writer/director Chris Butler previously helmed the excellent “ParaNorman.” I liked a lot of things about “Missing Link,” but it reads like a deliberate attempt by Laika to make a picture that has more mainstream commercial appeal.

Despite its glorious visuals, its lack of originality leaves it as a little better than middling bit of animation.