Review: "The Best of Enemies" 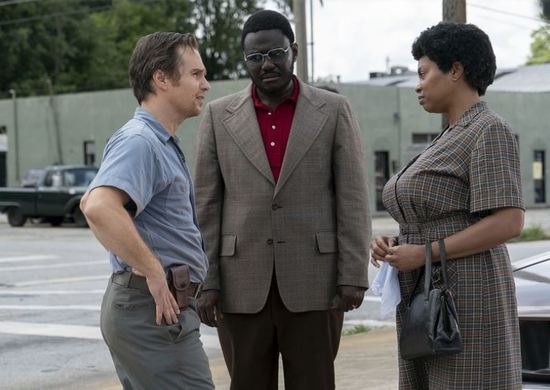 Hoo boy. The people who went after "Green Book" for not being sufficiently "woke" are going to lose their collective gourd over "The Best of Enemies."

The basic gist is a racist white dude overcomes his upbringing with the help of a black character he befriends, written and directed by a white guy based on a book by a white guy. And the white star is Sam Rockwell, who ate backlash over winning an Oscar for playing another racist character who takes steps toward redemption in "Three Billboards Outside Ebbing, Missouri."

Or, actually take the film on its own merits, which speak to a solid if unspectacular historical drama about the little nudges and shakes that form the earthquakes resulting in societal change.

This true story set in Durham, North Carolina in 1971 relates the tale of a KKK leader and a black civil rights activist who became unlikely friends. They are clashing as part of a broader effort to decide if the black and white elementary schools should be integrated after the black school was severely damaged by fire.

This is the sort of movie where you sit down in your seat knowing exactly what's going to happen every step of the way. And yet because Taraji P. Henson and Sam Rockwell are such gifted performers, and writer/director Robin Bissell unspools the story with sensitivity and emotional heft, every scene feels unpracticed and fresh.

Henson is Ann Atwater, a loud, big (helped with ample padding) woman who know how to get the black community motivated and out to support causes. But she's continually shot down by the Durham city council, led by thick-necked, white-suited genteel cracker types (like Bruce McGill).

"I better see your face looking black and angry," she warns one of her people who says she's too busy to show up.

The white politicians and bureaucrats keep chummy but arm's-length ties to the local Klan, led by C.P. Ellis (Rockwell). He runs a gas station that black folks know to avoid. He's uneducated and stubborn, but has a certain genuineness and charisma about him, which led him to being elected president -- or wizard, or cyclops, or whatever the hell the KKK calls them.

A judge doesn't want to own the decision of whether to integrate the schools, so Bill Riddick (Babou Ceesay), a black lawyer from "up north" (meaning northern North Carolina) is brought in to lead a charrette. This is an old-school meeting of the minds, which lasts two weeks, with half the council black and the other half white, and a two-thirds majority is needed to pass anything.

C.P. and Ann are elected co-chairs, and they go about the usual dance of hating each other and then getting to know one another. C.P. is committed to his wife (Ann Heche) and four kids, including a boy who's institutionalized with severe mental and physical challenges. You can take a wild guess if Ann winds up helping him out with his boy's situation.

Meanwhile, his Klan buddies (Wes Bentley chief among them) are leaning on C.P. to deliver a no vote, as well as individual white members of the charratte in the usual crackers-with-shotguns-and-friends ways.

Curiously, although we delve fairly deeply into C.P.'s background and mind, we never really learn much else about Ann other than her involvement in civil causes.

That's a failing of the script, but it also boasts lots of other little lovely moments. Like the white city council member who happens to turn his chair away whenever Ann is talking. Or the dumbstruck look on Ann's teen daughter's face when she C.J. is introduced to her. And the authentic, if colossally misguided, way in which C.J. initially believes the Klan is all about sticking up for one another.

"The Best of Enemies" is the sort of old-fashioned movie-making that's falling out of style now. That's a shame, but mostly for the people who stay away from a film about hatred giving way to mutual regard and, eventually, friendship.

Just don't talk about which actor is the lead and which the supporting, though.