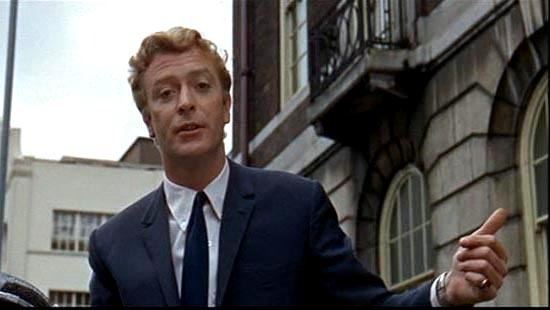 "Alfie" is the story of a charming letch who woos and uses a string of women in 1960s London. It was a hit Broadway play, but when they went to make it into a movie stage star Terrence Stamp didn't want to have anything to do with it, nor did virtually every other Brit actor of the day.

With frank depictions of casual sex -- including married women -- emotional abuse and a harrowing abortion sequence, the material was considered too controversial for mainstream movies. Richard Harris and bunch of other actors passed.

Finally, a virtual unknown named Michael Caine -- who was actually Stamp's roommate -- agreed to play it, despite warnings against it being a potential career-killer.

We know the rest.

Despite containing one of the most iconic characters of 20th century cinema -- not to mention the instantly recognizable hit Burt Bacharach song sung by Cher that plays over the credits -- somehow I had managed to miss "Alfie" up until now. It did not disappoint.

Like Spencer Tracy, Caine is one of those actors I just naturally associate with middle age, and now senior years. He seemed old early, and for a long time. Ian McKellen, Judi Dench, Harrison Ford, Helen Mirren -- their personas are indelibly marked with a strain of maturity. But they were indeed youngsters once.

So it's a bit of a shock at first to see this young, skinny, blond(ish) scamp bedding women and making a scene.

Director Lewis Gilbert and screenwriter Bill Naughton kept the feature of Naughton's play in which Alfie Elkins speaks directly to the audience. I'm trying to think of an earlier popular movie in which an actor looked directly into the camera and spoke right in the middle of a scene, and am drawing a blank.

Speaking sotto voce was long a staple of the stage, but I imagine it was quite a thing in 1966 for the protagonist to be speaking to another character, turn and comment to the audience about the interaction that is taking place, and then return to it.

Especially since these scenes usually occur with women, and he's incredibly insulting or dismissive of them. Of course, within the conceit of the device, they sort of go into a trance and don't hear themselves being denigrated.

Alfie refers to his girls as "birds" or, when his stripes are showing, as "it." They remade "Alfie" in 2004 with Jude Law, though I've never seen it. I'd be curious how the sexual dynamics of both films played at the time, and how they register now in the #MeToo movement.

Not well for the latter, I'd imagine, though I pretty well loathe the recent of fad of judging cultural artifacts by today's standards and mores rather than the context in which they were born. That way lies madness.

The notable thing about Alfie is that he never forces a woman to do anything. Indeed, he seems exceedingly accommodating and even deferential. He repeatedly stresses to his women that they are free to make their own choices, and if they choose to spend time with them he's pleased to have them.

What's really going on, though, is that Alfie has constructed a fictional alternate world for himself in which everything is consequence-free and the women he sleeps with are well aware that he's a wolf, always roving. So he's deluding himself into believing he's doing no one any harm, while his manipulations leave a wake of broken souls behind him.

For example, as the story opens Alfie is carrying on with a married woman, Siddie (Millicent Martin), including a hook-up in his car next to the metro station. He is a high-end on-call chauffer, which means he is often on the move with a Rolls Royce or other expensive vehicle, and plenty of downtime in between jobs.

But Alfie is also living with Gilda (Julia Foster), a rather dour young thing he refers to as "a stand-by girl." The great thing about a stand-by girl, he says, is that she knows she's a stand-by. Of course, it doesn't take long after meeting Gilda to realize that she doesn't see herself that way.

Gilda becomes pregnant and, despite promising to give the baby up for adoption, bears a son, Malcolm, that they both quickly become attached to. However, given Alfie's refusal to marry and settle down, she eventually leaves him for Humphrey (Graham Stark), a drab but decent bus conductor with whom she'd previously broken up.

One of the film's most poignant moments comes at the end when Alfie spots the family at a christening of their new baby girl, Humphrey joyfully tossing Malcolm into the air and referring to himself as his daddy.

Alfie has three other notable dalliances in the course of the story. The most heartbreaking is with Lily (Vivien Merchant), a rather frumpy middle-aged wife of his roommate at the convalescent home he is sent to when doctors find a shadow on his lung. Harry (Alfie Bass) and he become friends, despite the older man detesting Alfie's "filthy" love life. After being released Alfie has a one-night stand with Vivien, who confesses that she never been with another man besides her husband.

She becomes pregnant, leading to a truly excruciating sequence where they hire an abortionist (Denholm Elliott), who manages to shame the couple before performing an inducement in Alfie's disgusting kitchen. Alfie sees the aborted fetus and has a near-mental breakdown.

On the flip side is a fun affair with Shelley Winters playing Ruby, an older, self-confident American woman. She is rich and has similar attitudes about sex, so when things are looking down for Alfie he decides he should settle down with her and become her trophy husband. This leads to another painful scene, where he finds her in bed with another man.

What's he got that I don't, Alfie demands. "He's younger than you," Ruby coldly responds. The wolf meets an even bigger, more menacing wolf.

Finally there is the rather pathetic affair with Annie (Jane Asher), a red-headed hitchhiker that Alfie essentially steals from another professional driver, a truck driver named Frank (Sydney Tafler) who had initially picked up her up.

They're only together for a few weeks, but all Annie does is hang around Alfie's flat, cleaning and cooking all day. Part of him quite enjoys having such a servile bird around. But when a pair of his mates kid him about putting on weight from her hearty cooking -- "blown out" and "poncified" -- he abruptly breaks things off.

I quote enjoyed that wording and other British slang of the day. Alfie also uses the word "mumsie" to refer to a sort of comfortable, maternal feeling that some women put off. At varying times he is attracted or repelled by this quality.

"Alfie" has aged well, I think, because though it's very much a product of its time it explores an eternal subject: the competing impulses of young men to seek gratification for its own sake or embracing an existence that's less exciting but ultimately holds greater rewards.

"What's it all about?" Alfie famously asks in the final scene. I think he knows. I's just a question of when, or if, he'll get there.