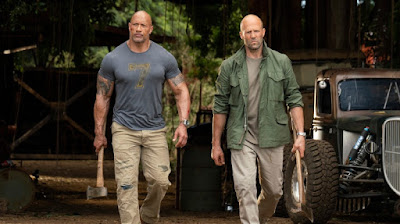 I didn’t know that a movie franchise could “present” a spinoff, but I’m not sure if anybody would buy a ticket to “Hobbs & Shaw” if they didn’t know it was part of the “Fast & Furious” universe. But it made its pile of money, helped by the branding as well as the star power of Dwayne Johnson and, to a much lesser extent, Jason Statham.

They played late-addition fringe characters next to Vin Diesel and his company of street racers, and here get their own 2-plus-hour movie to smack people around and toss strangle-throated one-liners and occasionally drive cars.

I pretty well loathed “Fast & Furious Presents: Hobbs & Shaw,” because it’s a totally uninteresting garbage movie. The silliness of the title, complete with dueling ampersands, only adds to the reasons to mock it.

Personally I would’ve called the movie “Bald Guys Grunt and Kick People” and be done with it.

Johnson is Hobbs, a U.S. government badass who gets loaned out for all sorts of tough jobs. Statham is Shaw, a criminal turned British MI6 agent who appreciates the finer things in life. They’re thrown together to track down Snowflake, a viral weapon with the potential to kill everyone on Earth.

Idris Elba plays the villain, Brixton Lore, who’s been cybernetically augmented so he’s more than a match for Hobbs and Shaw in hand-to-hand combat, even together. Vanessa Kirby plays Shaw’s sister, a capable agent in her own right who gets in between the two alpha dudes.

There’s a car-chasing-a-helicopter scene that’s not too bad, and later on the gang travels to Hobbs’ homeland of Samoa so they can have an old-school beat-down against the bad guys using medieval weapons and traps.

This is an egregiously dumb, ugly movie. I’m torn between laughing at it and hating it.

Bonus features are in inverse proportion to the quality of the film. There’s a feature-length commentary track with director David Leitch; extended and deleted scenes; an alternate opening; and a baker’s dozen of documentary shorts focusing on various aspects of production, from the star duo pairing to the stunt coordination.