Video review: "Once Upon a Time... in Hollywood" 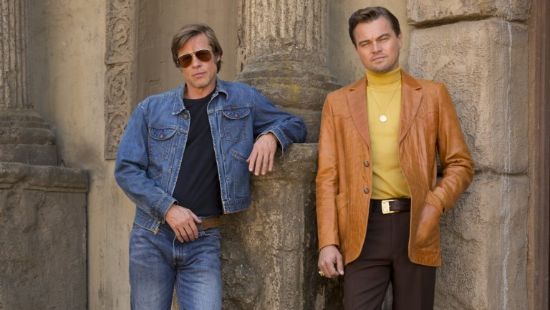 More than anyone else working in Hollywood today, Quentin Tarantino makes movies strictly for himself. The audience’s reaction is a mere afterthought.

His latest, “Once Upon a Time… in Hollywood,” falls about in the middle of his oeuvre. It's a big, sprawling, unfocused mess that nonetheless contains moments of Tarantino-esque intensity and entertainingly unhinged moods.

The story more or less centers on the duo Leonardo DiCaprio and Brad Pitt. DiCaprio is Rick Dalton, a fading actor clutching to the last scraps of fame from a long-canceled cowboy TV show, and Pitt is Cliff Booth, a laconic stuntman who is his stunt double, driver and gofer.

Dalton is outwardly McQueen-esque bravado but is inwardly Woody Allen-ish neuroticism. Booth lives in a scrap-heap trailer and has just a dog for companionship. Their relationship is part boss/flunky, part drinking buddies, part nanny/child.

DiCaprio has the showier part, swinging through wild moods while being spectacularly unappreciative of a career that's superior to that 99.99% actors enjoy. But ultimately I felt drawn to Pitt's character, an aging cowboy tooling around in a Champion spark plug T and Hawaiian shirt slip-on, never seeming to worry about what tomorrow will bring.

The movie never really seems to focus on either character, trading back and forth on their solo movements while occasionally bringing them back together. I yearned for the latter sections and mostly suffered through the former.

The tie-in with the Manson murders seems concocted just to have something to bounce the boys off of, or give the piece a semblance of a narrative. Margot Robbie barely has any speaking lines as Sharon Tate, who lives in the house up the hill from Rick along with her husband, Roman Polanski. She is sometimes seen and barely heard.

Like "Inglorious Basterds," the historical record is used as a mere springboard for Tarantino’s fevered imagineering.

The writer/director/noted amateur podiatrist flies his foot fetish flag freely this go-round, with lots of close-ups of filthy hippie hooves. I wonder why at some point these big-name actors don't say, "Hey dude, sorry but I don't want to do this scene with some girl's feet in my face."

Hey, ya like tootsies, that's fine by me. I just find it distracting and icky to have a scene where half the screen is Margot Robbie's face reacting to stuff and the other half is her soles. And the fact that nearly every woman who appears in the movie has a scene like this.

There are certainly some entertaining parts to it, but my guess is the person who will most enjoy Quentin Tarantino’s latest movie is Tarantino himself.

Bonus features are rooted in additional scenes that pad another 20 minutes onto the film’s already ample run time, bringing it to a full three hours. There ae also five making-of documentary featurettes: