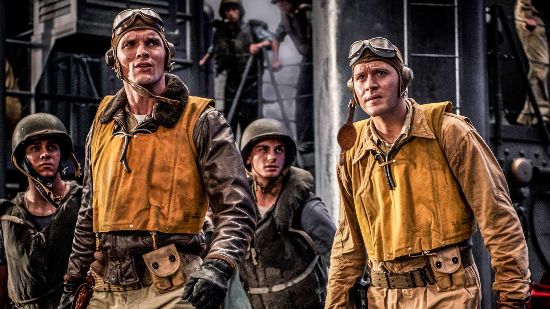 What a good old-fashioned rip-roarer war picture. “Midway” is the sort of movie they made 40 to 60 years ago starring John Wayne or Henry Fonda and a bunch of other guys, but with modern CGI effects for the extravaganza air-and-sea battles.

I went in skeptical that famously schmaltzy conductor of disaster flicks, director Roland Emmerich (“Independence Day”), would deliver anything more than another soulless special effects showcase. But paired with screenwriter Wes Tooke, a rookie to feature film scripts, and a solid cast of square-jawed actors of varying fame, I left amazed and more than a little shook.

The aerial combat scenes are just flabbergastingly good. The pilots careen and yaw all over the screen, a concerto of impacts and explosions sounding all around them. There are plenty of dogfights with Japanese Zeroes, with cutaways to how it all looks from the ground.

Best of all are the bombing runs, as the Americans tip tail over nose and dive seemingly straight down vertically, the Japanese aircraft carriers blasting a storm cloud of flak into their faces, pulling up at only the very last moment. Their wingtips kiss the ocean surface before climbing again.

It’s like taking a ride on the world’s longest, deepest roller coaster ridden by yowling demons bound straight for the fiery furnaces of hell.

The story actually sets up the war in the Pacific beginning at Pearl Harbor and all through the important military developments before Midway, including the battle at Marshall Islands and the James Doolittle (Aaron Eckhart) raid on Tokyo. The last hour or so of the movie is the titular battle, which is generally regarded as the turning point of the war.

Like a lot of old-school war flicks, the action flips back and forth between the pilots and ship captains on the front lines with the commanders and intelligence boys back at HQ, and does a good job of seeing how one group played off the other.

Patrick Wilson is Edwin Layton, a dweeby intelligence officer who predicted the attack on Pearl, and now has to pluck up the courage to convince the top brass to rely on the info from his team, which includes military band members turned into codebreakers. Woody Harrelson (!) plays Admiral Chester Nimitz, put in charge of the Pacific effort while most of the fleet was sunken or smoking.

Ed Skrein is terrific as Dick Best, the prototypical hotshot cowboy pilot who flies like he doesn’t care about coming back. Then he’s placed in command and has to become the shepherd to a flock of green newbies. He’s got a sort of hunched-over, laconic rascal charm. Think Han Solo by way of Jersey.

Surprisingly, nearly all of the characters are actual historical figures. The Japanese commanders are even given plenty of scenes so we can size up the strategy from their side. Though this isn’t an “equal sides” type of film production along the lines of “Tora! Tora! Tora!”.

There's even a little ode to filmmaker John Ford, who happened to be on hand at Midway the day of attack, producing some seminal documentary footage.

The film’s a bit long at 138 minutes -- so many are these days, it seems. I long for a time when editors were powers in Hollywood and had agency to tighten, tighten, tighten. Today’s movies are like Robert De Niro’s out-of-shape scenes in “Raging Bull.” They still can pack a punch, but the flab is distracting.

Still, a few talkie scenes that run long and some clanky dialogue aside, “Midway” is a terrific piece of throwback entertainment that actually gets the history right.