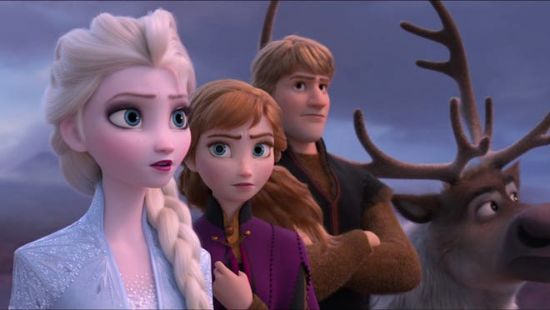 It may not hold a candle to the original, but "Frozen 2" is a bright and energetic romp through familiar frozen tundras. It's also got some fairly dark and dramatic patches, so fair warning that wee ones may clamber into your lap halfway through the movie.

(Full feeling has almost returned to my thighs.)

Elsa, Anna, Olaf, Kristoff and all the rest are back for another magical tale that's, well, just not quite as magical. I was trying think about what made "Frozen" so transcendentally good, and what element is missing here.

Let's start with the music. Robin Lopez and Kristen Anderson Lopez again provide the songs, and sadly not one of them is as catchy or memorable as from the first movie. Certainly nothing as instantly recognizable and iconic as "Let It Go."

The moment you heard that, you knew the contest for the Best Song Oscar was over.

Probably the tune that comes closest to matching those thrills is "Into the Unknown," another high-soaring Broadway-style showstopper ballad sung by Idina Menzell, who does the voice of Queen Elsa. It's about her daring to risk the relative peace and calm her kingdom, Arendelle, has found in the six years that have passed -- in real time and in the film's universe -- in order to seek out the answers to nagging questions that haven't even been asked.

But more so than just the quality of the songs, it's the way they're used in the movie that feels like a downgrade.

Some films are musicals, and some are just movies interrupted by songs. "Frozen" was definitely in the first category, as each tune propelled the story forward and revealed the characters' traits and emotions. Think of Princess Anna (Kristen Bell) and Hans falling for each over the course of "Love Is An Open Door."

In the sequel, the songs feel like interruptions carefully timed every 10 minutes or so. They don't really add anything that we didn't already know. As soon as the dialogue starts to taper off, you know a musical cue is coming.

Perhaps the most egregious is the solo by Kristoff (Jonathan Groff), the unsophisticated woodsman who is Anna's gentleman love, in which he essentially announces that he's going to disappear from the movie for awhile. It's appropriately titled, "Lost in the Woods."

Conjured snowman/comic relief Olaf (Josh Gad) gets another bouncy upbeat tune, "When I Am Older," in which he shows some emerging maturity but also the enduring naivete that makes him so lovable.

He also continues to rearrange his parts humorously, which makes him wicked sharp at charades. The omnipresent snow flurry given to Olaf by Elsa is replaced by some vague "permafrost" spell, mostly I'm guessing to release the animators from having to keep a distracting cloud over his head for the whole movie.

The story is a fairly typical "a new threat emerges" plot. Elsa finds herself called by a mysterious voice from the far north, hinting at secrets about the death and first meeting of her parents -- not to mention the source of her magical abilities with ice.

Family legends say their grandfather, King Runeard (Jeremy Sisto), built a huge dam as a gift to the Northuldra, the native people who live there, but were betrayed and attacked. Since then the forest has been enshrouded in an impenetrable mist. The four elements -- earth, wind, fire and water -- seem to be punishing the humans for their transgressions.

I really liked the massive stone giants who tromp around the northland like mountains on the move, without even visible eyes or discernible facial features. Made me think of the Iron Giant, and anything that does is a good thing.

Sterling K. Brown provides the voice of Mattias, a loyal guard of Arrendelle, while Martha Plimpton is the Northuldra chief, Yelana. Alfred Molina takes over the voice of Elsa and Anna's father, and Evan Rachel Wood does the same for their mother.

Jennifer Lee wrote the screenplay and co-directed with Chris Buck, so the creative team is largely intact. Lack of continuity is often the biggest challenge in making a successful sequel, not to mention trying to rush it out too soon.

Neither mistake was made here. It's just really hard to catch lightning in a bottle twice.

Kids will probably treasure "Frozen 2" as much as they did the first one. Their parents will love that their children love it, while understanding that we should appreciate greatness for the very reason that it happens so rarely.

Posted by Christopher Lloyd at 8:30 AM