Review: "A Beautiful Day in the Neighborhood" 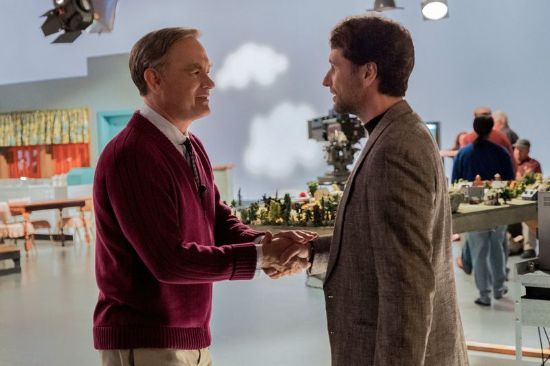 If you’re expecting a biopic of Fred Rogers, then “A Beautiful Day in the Neighborhood” is not it.

You will leave the theater not knowing much more about Rogers than you did going in, assuming you watched the iconic “Mr. Rogers’ Neighborhood” show as a child, or even just saw the solid documentary about him from last year, “Won’t You Be My Neighbor?”

No, this is more movie-making as therapy. Director Marielle Heller (“Can You Ever Forgive Me?”) and screenwriters Micah Fitzerman-Blue and Noah Harpster are aiming to summon Rogers’ spirit and spread his ethos, that each and every person is precious, across the globe.

Tom Hanks gives a superlative performance that makes a conscious choice not to do an impersonation of Rogers. Physically there’s not much resemblance, and Hanks eschews that reedy little country priest voice Rogers used to speak to generations of children over the decades his show was on PBS.

Rogers isn’t even the protagonist in his own movie, that role being delegated to Lloyd Vogel (Matthew Rhys), the journalist charged with profiling him circa 1998. It’s a fairly common trope for modern movies to include a storyteller character as a stand-in for the audience, asking the questions they’d like to ask and acting as an avatar for their emotional reactions.

But in this case, Lloyd isn’t just telling Rogers’ story; he’s the receptacle of his ministrations. This is a movie about a writer who had his life changed by the person he was writing about. If this film were a sentence, Lloyd is the subject and Rogers is the object.

Essentially, “A Beautiful Day in the Neighborhood” is an extended cinematic group session. We are collectively blessed by Mr. Rogers to accept his wisdom, go forth and be neighborly.

This isn’t necessarily meant as criticism, though I suspect I didn’t love “Neighborhood” as much as most people will. This is the ultimate laughter-and-tears sort of filmmaking that tends to be very successful at the box office and during the awards season.

It’s just that this is the kind of movie that sets out to do a certain thing, and it does that thing very well, and people will leave it grateful for the thing they were expecting it to do. I felt fulfilled and utterly unsurprised.

Lloyd works at Esquire magazine as an investigative reporter. Professionally he’s riding high but has earned a reputation as a hard-to-get-along jerk; personally he is married and recently became a father late in life. Susan Kelechi Watson plays his wife, Andrea, who deeply loves Lloyd but also recognizes in him fault lines, a physical and emotional absence, that could threaten their nascent family’s stability.

Lloyd is assigned to write a 400-word piece on Rogers for the magazine’s issue on heroes, which is the sort of thing a newspaper reporter would be expected to crank out in half a day but here becomes a weeks-long odyssey with multiple trips to Pittsburgh to interview Rogers.

Rogers instantly treats him with kindness and familiarity, turning the conversation around to focus on the journalist rather than the interviewee. It seems most of Lloyd’s trauma involves Jerry (Chris Cooper), his father, though Lloyd stubbornly refuses to use this label. Jerry ran out on the family a long time ago and now seeks some kind of reconciliation.

The background is filled with many lovely bit parts. I especially liked Christine Lahti as Lloyd’s supportive-yet-demanding editor; Wendy Makkena as Dorothy, Jerry’s girlfriend who helped him put the pieces back together; and Enrico Colantoni as Bill, the right-hand man who’s always at Rogers’ side, part gofer and part watchdog.

I found interesting the film’s depiction of the production of Rogers’ show, which is like a carefully oiled machine of well-worn parts. The Pittsburgh crew is old-timers who love Fred while also being slightly exasperated by his ambling, schedule-be-damned ways. They know they’re not breaking any new ground but are focused on doing what they do as well as it can be done.

Much the same can be said of “A Beautiful Day in the Neighborhood.”

I admit part of my reaction may be colored by the TV show itself, which ran from 1968 to 2001 (with a short, unremembered break in the ‘70s.) Though it’s now sacrilege to say such things, the truth is that, even as a small child who most needed to hear the message of self-love that Mr. Rogers spun so earnestly, I found his show terribly boring.

A Generation X-er saying you didn’t like “Mr. Rogers’ Neighborhood” is like being a Baby Boomer who found Woodstock to be just a concert, or the Beatles a great band but a trifle overrated. (Stage whisper: both are true.)

So you can hate me, and love this movie, but I will remain deeply in like with you both.