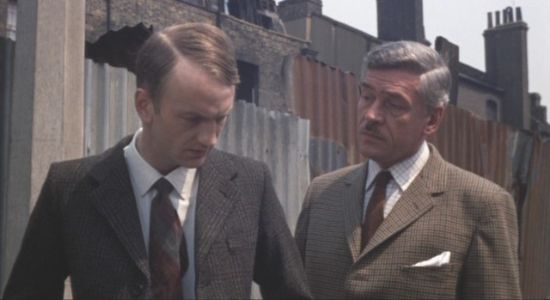 Herman Melville wrote "Bartleby, The Scrivener" and published it in a magazine anonymously while he was slaving away on his masterwork, "Moby Dick." The story of a lowly office clerk who (politely) refuses to do his work, many observers saw it as Melville's way of hashing out his writing demons. It is largely regarded as his greatest short story.

By the time he died, Melville's nascent fame had faded and he could no longer make a living at writing, so he was forced to take a job as a clerk at a customs and duties office. He died in the same virtual anonymity in which he first published "Bartleby," and he and his character's fates are disturbingly mirrored.

There have been a few adaptations of "Bartleby" as a radio play, stage play, an opera, and several films, including a comedic version in 2001 starring Crispin Glover and David Paymer, unseen by me (or most anyone). And the passively rebellious nature of Bartleby has been borrowed in numerous ways by writers and filmmakers, such as Ben Affleck's stubborn fallen angel in "Dogma" carrying the name.

I had never heard of the 1970 film version, and it's apparently dropped whatever status it once had in the public consciousness. It's a short movie, just 78 minutes, written by Anthony Friedman and Rodney Carr-Smith, with Friedman also directing and Carr-Smith producing.

It was the only film Friedman ever made, and Carr-Smith only made one other. The film is low budget, filmed in just a few locations along with some verisimilitudinous scenes shot in the everyday hustle and bustle of London.

Bartleby is very much in the mode of Chauncey Gardiner or Charly Gordon, seemingly simpleton characters whose naive innocence contrasts with the dark and oppressive world that they inhabit. In movies like this the story is not about Bartleby so much as using him as a tool to explore ourselves.

The lesson we're supposed to take away is not that Bartleby is an oddball, but that we're oddballs for not thinking more like him.

John McEnery is an interesting physical specimen for the part: young, tall and thin, with receding blondish hair swept severely over the top of his head. He only ever wears one suit, seems to come from nowhere, and apparently spends all his time not at work wandering around London, peering into storefront windows or other things that interest him.

Bartleby barely ever speaks, and rarely unless spoken to. His default mode is with his head hunched over and his eyes downcast, as if he is trying to disappear into the flooring.

Friedman shoots a lot of modernist architecture around Bartleby, showing him trudging up stairs or along streetscapes with antiseptic-looking buildings in the background. The very advancements that have made us so proud of ourselves -- phones, computers, transportation -- are baffling to him.

He applies for a job at a small accounting firm as an audit clerk. (Or "clark" as it's pronounced in the Brit idiom.) It's a tedious job -- checking row after endless row of numbers to make sure the accounts all add up. Bartleby previously worked at the post office, first in the "dead letter" (undeliverable) department, then later as a clerk.

The boss -- never named, nor is the business -- is played by Paul Scofield as an upper-crust type who favors pipes and three-piece tweed suits. He hires Bartleby, astonished that the young man makes no specific demands in pay. "The salary is not important. Anything reasonable will be sufficient."

Bartleby takes the ad-hoc work station in the little nook outside the boss' office and at first is very proficient in his work. But one day when asked to work on the Prebble account, he utters the words that soon become his mantra: "I'd prefer... not to."

He says this in a halting way, very politely, often with the preamble of "At the moment," as if this is a temporary situation that will change.

At first the boss is nonplussed, and assigns the work to other employees. But soon Bartleby's refusals come more frequently and more broadly: "I'd prefer not to do accounts anymore today."

Things go from there. The boss, who has a kindly heart, finds himself unable to simply fire the young man. A colleague that he lunches with weekly (Thorley Walters) urges him to do so, ultimately suggesting his weak nerve will impact his reputation as a businessman.

The boss seems to think that if he acts in a reasonable way, Bartleby will be reasonable in return. But things grow worse, and soon it causes strife with the other workers who have to take up the slack.

It reaches a head when the boss goes into the office on a Sunday -- cued by the ringing church bells -- and discovers that Bartleby is living there. He follows Bartleby on his excursions and confronts him, demanding to know why he refuses his simple demands for work.

Bartleby says that anything he would say would provide no satisfying answer, and hints cryptically that he explained himself on his job application. The story never returns to explore this.

The boss finally fires Bartleby, but he prefers not to vacate the offices. Ultimately the boss moves the business to another location, thinking he has washed his hands of the troublesome fellow. But the old landlord summons him back, complaining about the abandoned puppy of a man.

The boss tries one last time to reason with him, even offering to drive him to his own personal doctor. (In Melville's story and most adaptations, the boss actually surprises himself by inviting Bartleby to live with him, though not in this version.)

Bartleby is taken away by the police and placed in an asylum. The boss goes to see him a few times, the only visitor Bartleby has, and is confronted by a strange, painfully thin woman who seems to know them both. Bartleby deteriorates, preferring not to eat, and eventually dies.

I found it interesting that the boss' chief reaction to Bartleby's refusals and strange ways is not anger, but embarrassment. When the police arrive to pluck Bartleby out of the old office, the boss runs away, as if simply being near the scene will discredit him. Similarly, in the final scene he walks briskly away from Bartleby's slumped body, pausing long enough to inform a pair of nurses before scurrying away.

I found myself strangely moved and engaged by "Bartleby." It's a short, slow-moving picture without a whole lot of narrative. The characters are never explored in a traditional kind of storytelling way -- for example, we never learn anything about the boss' life away from work.

And yet, it's an odd and emotional tone poem of a movie. Bartleby is different from anyone else, and though passive by nature he's not afraid to be different. In one of his few monologues, he notes that most people are afraid to talk to themselves, though he is not.

Bartleby's little rebellions do not seem to have any purpose behind them, other than for their own sake. He chooses to take the left-hand turn while everyone else goes right. He does it perhaps because he simply wants to see what everyone else is missing.