"Mother!" and the Coat of Many Colors 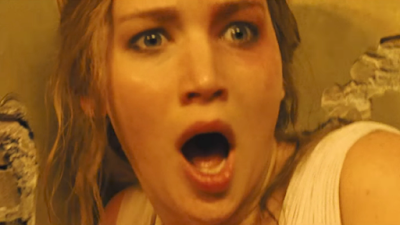 I was finally able to catch up with "Mother!", Darren Aronofsky's ambitious new meditation on... something that has sharply divided critics and largely estranged audiences. Just a few thoughts.

All this is VERY spoiler-y. So desist if you desire to experience the film's surprises on your own.

First off, unlike many others I don't think giving a complete analysis of the movie necessarily gives everything away. It has not so much plot twists as a labyrinthine pit of meaning that grows more intense and more amorphous the deeper you go. Once you know it's a descent, it's just a matter of pondering where you're going to end up and what meanings you're going to take away from the journey.

And I think they are multitudinous. People have come forth with all sorts of interpretation of what the film "means," and I believe they're all right. Star Jennifer Lawrence herself has posited that her character is Mother Earth and her husband, called simply Him and played by Javier Bardem, is God. But it's clear this is Lawrence's opinion, not Aronofsky's.

I don't think the writer/director actually intended any single vision of "Mother!". It is literally all things to all people... and nothing to some, who will find it overly mysterious and arty. It's less a portrait or a parable than an impression, and we put as much of ourselves into the vision as the artist did.

Certainly there are plenty of religious themes. The interlopers barging in their secluded mansion, played by Ed Harris and Michelle Pfeiffer, never named but credited as Man and Woman, are representations of Adam and Eve. Him is tickled with their presence, especially Adam, while Mother is irked at any intrusion. Aren't I enough for you? she asks Him repeatedly. He responds with protestations of love, but there's always a "but."

Man and Woman's sons, who show up and immediately get into a fight that results in one's death, are obviously Cain and Abel in this telling. The crowds of people who show up after are the rest of mankind -- messy, violent, worshipful of Him's poetry. The outcome of Mother's pregnancy follows pretty obvious Christ parables.

But I think there are also a lot of themes about parenthood, and the chasm between male and female gender roles. These take place on a simple humanistic level, where the characters cease on some level being allegorical and are simply who they appear to be.

I also believe the film has a lot to say about the role of the artist in society, and their relationship to their fans/followers. These types of movies can quickly become tiresome, particularly in the prism of Hollywood -- 'Oh please, tell me more about your struggles with fame, adoration and all those millions of burdensome dollars.'

But Aronofsky lays out his tale without a lot of obvious egotism, showing how the creative process starts as a singular act and the work ends up becoming something that is shared and dissected and stolen. The artist gives and gives, and takes and takes. Like Charlie Kaufman's "Adaptation," "Mother!" is a Gordian knot that inextricably ties up the story being told and the role of the storyteller.

In a lot of ways, the movie is really about itself.

Posted by Christopher Lloyd at 8:45 AM