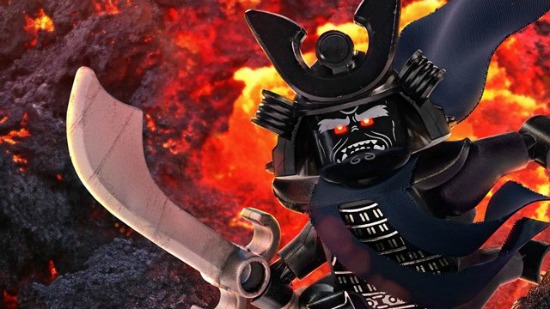 The whole concept of “Lego Ninjago” is just brilliant, from a marketing standpoint.

Kids love Legos and are positively insane for ninjas, or chop-socky action in general, and they also will watch almost anything animated. Throw all those things together and you’ve got something that smaller children, especially boys, are guaranteed to devour.

As the dad of 4- and 6-year-olds who live loudly the dogma of their Y chromosome, I am unnervingly well acquainted with the TV series, “Lego Ninjago: Masters of Spinjitzu,” now in its seventh season.

I have to say that for a kids’ show, I’ve been impressed with the level of storytelling involved. The relationship between Lloyd Garmadon and his estranged father, the evil Lord Garmadon, has had permutations of Skywalker-ian complexity, with Lloyd starting out as a snotty kid and evolving into the “chosen one” Green Ninja.

After “The Lego Movie” became a hit, it seemed inevitable that the ninjas would get their own feature film. My kids, and to a lesser extent I, looked on with genuine anticipation.

So I have to say I’m disappointed. The veritable platoon of filmmakers -- with three credited directors, five screenwriters and seven people receiving story credit -- seem to have gone out of their way to toss the entire television series, even swapping out the whole voice cast for bigger names who, frankly, aren’t nearly as good.

The addition of live action sequences, which was probably unavoidable after Will Ferrell did it, is off-putting and disruptive, with Jackie Chan playing a stereotypical Asian shopkeep who has important lessons to impart. He also does the voice of Master Wu, the ninjas’ serene and mysterious teacher. There’s also a furrier addition late in the game that’s just goofy.

The movie is essentially an entire reboot of the Ninjago universe, with the six ninjas more or less back to square one in terms of their martial arts/elemental powers, relying instead on huge robot ‘mechs to battle Lord Garmadon. However, Nya, the lone female ninja voiced by Abbi Jacobson, has already joined the group, Lloyd (Dave Franco) is already grown up and the Green Ninja, and Zane (Zach Woods) has already been revealed to be an android, though he seems to be somewhat in denial about this.

Rounding out the crew are Fred Armisen as Cole, the earth ninja, Kumail Nanjiani as Jay, the lightning ninja and Michael Peña as Kai, the fire ninja. Olivia Munn voices Lloyd’s mom, Koko, who used to be married to Lord Garmadon (Justin Theroux), who has blackened skin from a deadly snake bite, four arms and cries tears of fire. Talk about falling for the bad boy.

The story is sort of a very condensed version of the first few seasons of the TV show: the ninjas fight Lord Garmadon, then find themselves allied with him, leading to some tenuous father/son bonding between him and Lloyd, followed by some scorpion-and-frog-like realignment.

It’s an energetic movie, with cool martial arts action scenes and neat creatures. The biggest problem with “The Lego Ninjago Movie” is that they’re trying to force it into the template of “The Lego Movie,” with crazy quips and comedic asides.

It’s almost as if, instead of creating something new and cool, they were determined to re-use the same pieces in a different configuration -- like trying to build the boat using the parts for the tank. Whether it’s construction toys or movies, you just gotta let things be what they are.

Before I go, in the interest of fair journalistic criticism, I should report a couple of things. First, duty requires me to disclose that I nodded off a few times. I think this is the third time this has ever happened to me, and both of the others were also kiddie flicks that failed to hold my attention.

Also, my kids really liked the movie. We talked a little afterward about how it was different from the show, but it still came down to the fact that this movie included: A) ninjas B) Legos, and C) cartoons. So you can mark the target audience down as “sold,” even if dad was sleeping on the job.