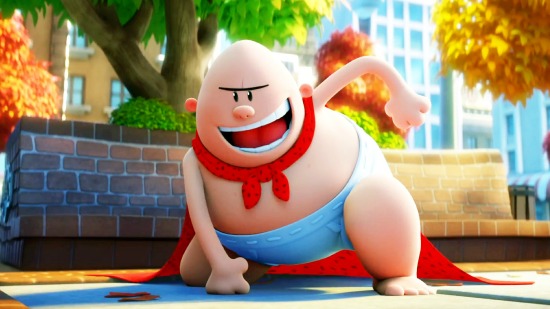 When a mainstream movie doesn’t get screened for critics, it’s usually an indication the studio knows it has a dog and its hands, and figures no publicity is better than bad publicity. They’re wrong, of course: My own observation is that films that get dumped into theaters with no fanfare or press disappear even quicker than those that got negative reviews.

But every now and then, a decent movie gets this treatment for mystifying reasons. Lately, many of these have been family- or kid-oriented fare like the wonderful “Paddington” from a few years ago.

“Captain Underpants: The First Epic Movie” isn’t quite that good, but it’s an amusing and rather clever kiddie flick that had my two boys, ages 4 and 6, rolling with laughter almost the entire time. And even grumpy old dad chortled not a little.

The clever set-up is that the two protagonists, George and Harold (voices by Kevin Hart and Thomas Middleditch), are fourth-grade cut-ups and budding cartoonists themselves. They spend most of their time creating comic books and pulling pranks on Mr. Krupp, their anger-absorbed principal. One of their favorite subjects is Captain Underpants, about a super-powered hero who only wears a cape and his undies.

Through a little hypnosis, the boys actually convince Mr. Krupp (Ed Helms) that he is Captain Underpants, leading to much hilarity as their tubby educator galivants about town in his tighty-whities. Of course, he eventually wakes up and wonders where his clothes are. Later, the Captain manages to obtain actual super-powers to go with his delusion.

Nick Kroll provides the voice of Professor Poopypants, a substitute teacher who turns to evil villainy out of consternation for mockery of his name. It all builds up to a dizzy battle with giant robots and such.

The animation has a deliberately simplistic sort of sheen, interspersed with cut scenes consisting of motion comics from the boys’ illustrations.

Based on the novels by Dav Pilkey, “Captain Underpants” didn’t do so well at the box office. (See section above re: no vs. bad publicity.) It’s definitely worth a look on video, though, as it’s chock-full of boy-centric humor and gross-outs.

Maybe if we do get a sequel, it won’t try to fly under the radar.

Bonus features are pretty good, anchored by six making-of featurettes, including one where Hart and Helms pull real-life surprises on fans. There are also deleted scenes, gallery of stills, music videos including one with theme song writer/performer “Weird All” Yankovic, and a “Tightey-Whitey Q&A with the Stars.”