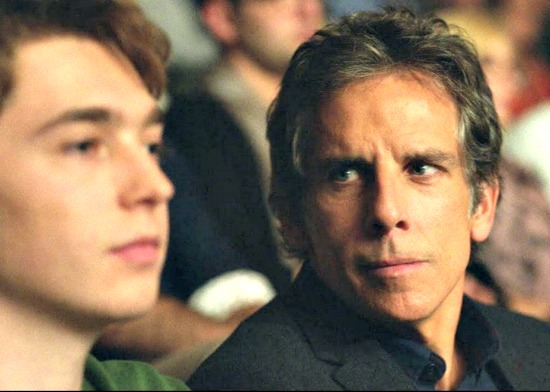 
“Status” is one of those words that used to have a different connotation than it does now, due to the quiet revolution of social media. Most of us spend an inordinate amount of time “updating our status,” whether it’s an important life event or (more likely) sharing the quotidian details of our existence.

Most interesting is the phenomenon of social media envy -- looking at other people’s posts and feeling jealous about their fabulous new vacation, car, family portrait, concert they attended, etc. It’s a self-feeding loop, as people then feel compelled to share only the positive stuff going on in their life.

Not sure if anyone’s invented a term for that, but if not, may I suggest “status curation” as an option.

Brad Sloan is positively a ball of status envy. Though “Brad’s Status” does not specifically incorporate social media into its message, this smart black comedy/drama certainly feels the weight of those digital interactions. Brad is a seemingly normal middle-aged guy torn up by the relative success of his college chums.

Thematically, the movie is similar to Nicole Holofcener’s “Friends with Money” from 2006.

Ben Stiller is perfect for this role, and I have little doubt writer/director Mike White (“School of Rock”) crafted it specifically for him. There’s an underlying aspect of self-doubt and neuroticism to his comedic sensibility -- usually playing the smart, talented guy who feels that everyone else is much smarter and more talented.

I noticed that whenever Brad is feeling particularly diminished, director White always manages to place him standing next to taller characters, especially women. Stiller’s not a big guy, and his Brad seems to seethe passively when he’s vertically challenged by others -- as in a choice scene were a haughty restaurant hostess gives him a poor table, and literally looks down on him when he nicely asks for a better.

The story is structured around Brad taking his 17-year-old son, Troy (Austin Abrams), on a whirlwind of college tours/interviews in the Boston area, especially Harvard (where Troy wants to go) and Tufts, Brad’s own alma mater. Meanwhile, his wife, Melanie (Jenna Fischer), is stuck at a work convention and offers her ebullient encouragement from afar.

They live in Sacramento in a nice middle-class house. Brad’s a former journalist who started running a nonprofit after newspapers went south, and Melanie has a stable government job. They seemingly want for nothing.

But four of Brad’s friends are big, famous successes, and it weighs constantly on him. Craig (Michael Sheen) is a former White House communications flak doing the high-power author/speaker thing. Jason (Luke Wilson) runs his own hedge fund and flies his big family around on a private jet. Nick (White himself) is an A-list Hollywood director who just had his house featured in Architectural Digest and hosted a fancy wedding (which Brad wasn’t invited to). Billy (Jemaine Clement) sold his dot-com startup for a bundle and retired at 40, now galivanting around Maui with his two girlfriends.

In his dour narration, Brad ponders the injustices of the haves and have-nots: “For them, the world isn’t a battleground. It’s a playground… a dream. It’s heaven, manifested.”

Troy’s a talented musician, and Brad thinks he's doing his fatherly duty by cautioning him not to get his hopes up. He’s surprised when the youngster relates that his guidance counselor feels he’ll get into Harvard, and anywhere else he applies.

Brad is stunned, and halts his self-pity train long enough to revel vicariously in his kid’s success… before wondering if he’ll start to envy his own son. He even wonders if Melanie’s happy, supportive nature failed to provide the impetus he needed to strive harder.

In case you haven’t figured it out, Brad’s a basically decent guy who blames a lot of other people for his problems, which barely even exist. Watching the movie, I kept thinking how nice it must have been to actually have the time/money to take cross-country trips with your dad to check out colleges in person. I did it all by brochure.

“Brad’s Status” is a funny movie with some unexpectedly deep pokes at our collective tendency to self-criticize and self-aggrandize. Take it from an award-winning film critic!