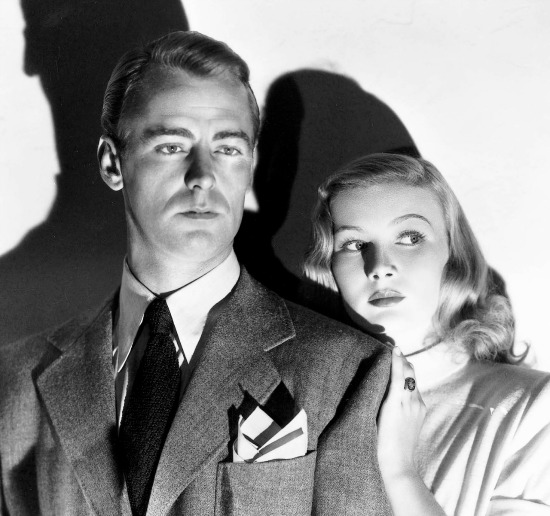 It seems everybody was happy with "The Blue Dahlia" but me.

It was another hit film noir for stars Alan Ladd and Veronica Lake, in the third of their seven on-screen pairings together. It was the first Hollywood screenplay for Raymond Chandler, who got an Oscar nomination out of it (despite having to be bribed/threatened to stop drinking long enough to complete the script).

And the movie was another feather in the cap of director George Marshall, who enjoyed one of the longest and most productive careers in moviedom, working consistently from 1916 to the early '70s. Today, the film is widely considered the apotheosis of the noir genre.

I enjoyed Ladd's cool, slightly mean demeanor and how it contrasts with Lake's serene, angelic moll. The photography (by Lionel Lindon) is pretty stunning, shafts of darkness volleying across bright scenes and vice-versa. And there's an interesting rogues gallery of grim gangsters, spider women, joyless coppers, shifty snoopers and other colorful supporting characters.

But the story is just a complete mess. "The Blue Dahlia" is a dull, confusing mishmash of phone calls and anticlimactic confrontations.

Chandler didn't even mean for it to be a movie; he was writing a book, got stuck and was ready to chuck it. Producer John Houseman showed it to Paramount, which bought the story within 48 hours. Chandler was on-set during production, madly dashing off pages as the crew shot the movie even faster. The ending got changed around at the last minute because the studio was worried about portraying a wounded serviceman as a woman killer, as the writer intended.

Chandler bumped heads with Lake and confided he thought she ruined every scene she was in, famously dubbing her "Moronica Lake."

The story has many moving pieces, some of which barely seem to rub up against each other. Ladd plays Johnny Morrison, a decorated Navy officer who has just returned home from the Pacific theater with chums Buzz (William Bendix) and George (Hugh Beaumont). Buzz has a metal plate in his head and reacts poorly to loud noises, especially hot swing tunes (which he dubs "monkey music"), causing him to go into agitated, violent fits. George is the calm-headed caretaker, and a lawyer.

Johnny decides to surprise his wife, Helen (Doris Dowling), by not calling her in advance of his return. He finds her living in a swanky campus of hotel bungalows where there's always a party going on. Helen has been carrying on an open affair with Eddie Harwood (Howard Da Silva), the slick owner of the titular night club and a reputed gangster.

Eddie's the sort to play the percentages, so he's ready to bow out when the husband returns. But Helen wants none of that. During a quarrel, she even reveals to Johnny that their son, whom she'd told him had died of diphtheria during his overseas deployment, had actually been killed in a car crash while she was driving drunk. Enraged, he pulls out his .45 service pistol to threaten her.

The long and short of it is Helen winds up dead, and we spend the rest of the movie trying to figure out who the killer is. Buzz had also been in her bungalow that night, looking for Johnny and not realizing who she was; Marshal throws in a few leering, low-angle shots of Buzz looking crazed to heighten our suspicions. Eddie also swung by, so he would seem a likely candidate -- especially after we find out more about his past.

Meanwhile, Johnny was out walking in the rain and was picked up by Joyce (Lake), with whom he immediately hits things off. Later it's revealed that she's Eddie's estranged wife. Strangely, the movie never really follows up on the love quadrangle/wife-swapping angle.

Of course, rather than turning himself into the police Johnny decides to go find the killer himself. This results in a few encounters with seedy sorts, most notably Leo (Don Costello), Eddie's right-hand man at the club. He's very protective of Eddie, trying to steer him away from both Joyce and Helen, raising the obvious latent homosexual possibilities.

Also shambling around the perimeter of the tale is "Dad" Newell (Will Wright), the house detective at Helen's hotel. As near as we can figure, his job is to creep about the place, mentally record the doings of the residents and keep an eye out for opportunities to blackmail them. An older man and former cop himself, Dad is repeatedly offended when people point out his blatant motives.

The storyline is a grand example of how you can have things constantly happening but not really go anywhere. Johnny's DIY investigation never actually manages to come anywhere near pinpointing the killer -- the professional police get their man in the end -- and his ersatz romance with Joyce is a stop-and-start series of chance encounters. Ladd and Lake actually share perhaps 10 minutes of screen time together.

I lost count of how many phone calls there are in a movie. If they employed modern product placement back in 1946, I'd be willing to write the whole film off as an ad for Ma Bell.

Trouble is, phone calls aren't terribly exciting as cinematic fodder, or at least they weren't back then. Filmmakers hadn't yet come around to the idea of letting the audience hear the voice on the other end. So it's just some dope standing there holding up that old-timey hearing piece up to his ear, saying stuff like, "Oh?" "Really?" "You don't say." "I'll meet you right there..."

Johnny's in-person conversations with Eddie aren't much better, a roving game of innuendo and deflection. We keep waiting for them to just sock each other. Actually, that happens pretty early on, and we hope hopelessly for a rematch.

Even the eponymous flowers get a short shrift, as their lustrous ultramarine color just looks a dull, grayish black on camera.

"The Blue Dahlia" is a wonderful artifact to look at, an emblem of an older age and a then-new hard-bitten take on the movies. But all the pretty pictures don't matter if you haven't got a great story to tell.