Review: "Battle of the Sexes" 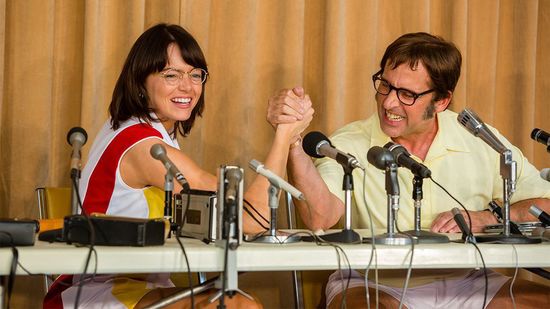 The match was a lark, a piffle, a silly spectacle, until it became something more. Likewise, the film version of the iconic 1973 tennis game between Billie Jean King and Bobby Riggs is much weightier and more substantial than you’d think.

It shows the game itself, of course, featuring Emma Stone and Steve Carell as King and Riggs. If the volleying looks slow and wimpy compared to what you’d see today, it’s not because a pair of Hollywood actors couldn’t make a better show of it. Go watch tapes of the real match; the movie copies it pretty well. All sports got faster and stronger; Serena’d kill either one of them.

But “Battle of the Sexes” focuses more on the year leading up to the faceoff, giving it context within changes happening in the sport and society as a whole. Directed by “Little Miss Sunshine” team Valerie Faris and Jonathan Dayton, from a screenplay by Simon Beaufoy (“Slumdog Millionaire”), it’s also an astute character study of two people who were more alike than we’d think.

The early 1970s was the era of women “libbers,” Roe v. Wade, the first large wave of women entering the workforce and finding the traditional corridors of influence barred to them. Men liked the free love stuff, but wanted to keep the country clubs and the reins of power. Naturally, they resented people like King who had the audacity to demand that the male and female tennis champions be paid the same.

Carell looks pretty well like Riggs, with the help of some false teeth and a wig. Stone resembles King not at all, and even a pair of glasses and dark brown shag haircut fail to close the gap. But each manages to carve an authentic character out of the fog of history.

Stone’s King is at once headstrong and retiring, very self-aware and also self-effacing. She squares off with Jack Kramer (Bill Pullman), the smug head of the chief tennis association, and starts her own competing league for the top women players. Sarah Silverman plays Gladys Heldman, who provided the business savvy and sponsorship -- from Virginia Slims, because doesn’t smoking and tennis go great together?

But King is also staggered by her attraction to Marilyn Barnett (Andrea Riseborough), a hairdresser who eventually becomes her lover. This while she was married to Larry King (Austin Stowell), a former player who gave her unwavering support as a fellow athlete. The scene where he learns of their affair, but still tenderly applies ice packs to her knees with well-practiced efficiency, is sensitive to all three souls.

(The film fiddles with history here; King began to explore her attraction to women years earlier, and started the affair with Marilyn in 1971. And she was King’s secretary, aka employee, not a hairdresser. Years later she sued King for palimony, which resulted in her sexuality being publicly outed.)

Riggs is portrayed much as the world saw him: an over-the-hill former champ with a gambling addiction who was down on his luck and saw challenging the top women’s players of the day as a way to garner attention and money. With his own marriage to Priscilla (Elisabeth Shue) foundering, he used his gift of gab and natural showmanship to play up the King match, dubbing himself a “male chauvinist pig” and giving interviews about keeping women in the “bedroom or the kitchen,” stuff he may not have even half believed.

Largely forgotten today is that Riggs had already challenged and beaten the top-ranked female player of the day, Margaret Court (Jessica McNamee). Every film needs a villain, and Court is shoehorned into that role, sneering at King’s dalliance with full religious fervor. (This owes more to Court’s modern-day fight against same-sex marriage in her native Australia than anything she said or did at the time, methinks.)

Both Bobby Riggs and Billie Jean King are revealed as flesh-and-blood creatures who lived behind the headlines. They make for an interesting pair: the hustler and the heroine, the lobber and the libber. They put on a show for funsies, and people paid attention and not a few minds were changed a wee bit.

In real life, King remained friends with Riggs until the day he died, which was awfully chivalrous of her.