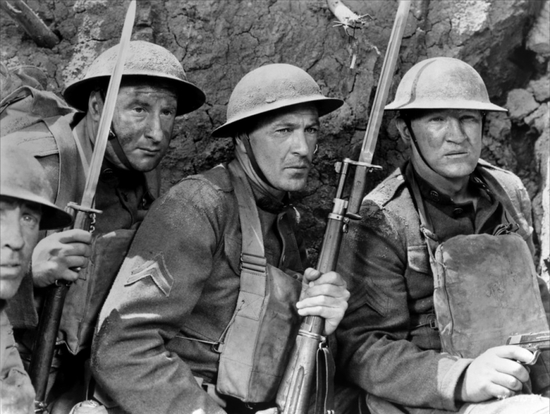 Of all his many roles, "Sergeant York" may well be the one that is most quintessential to the iconography of Gary Cooper.

It was never truer of anyone the old saw that actors play roles, but movie stars play themselves. Cooper made a career out of portraying simple, straightforward men of unimpeachable integrity, humility and all-American values. His protagonists were usually dim, or at least poorly educated, though they possessed a homespun sort of caginess -- especially with regard to the manly arts of shooting, building and fixing.

But not romancing. When it came to women, Cooper's coterie of characters were usually adorably inept, more often the catcher of woo rather than the pitcher.

"Sergeant York" was the top-grossing film of 1941, an unabashedly patriotic picture that was helped by playing at the same time as Pearl Harbor. It won Cooper his first Academy Award (the other being for "High Noon"), launching the richest period of his career.

I was surprised how little of the movie actually depicts the wartime exploits of Alvin York, the most decorated American soldier of World War I. The film doesn't even get us to the European front until the last half-hour, and York's solitary charge upon a series of German machine gun nests takes but a few minutes.

Astonishingly -- but historically accurate -- Alvin single-handedly killed more than 20 enemies and captured 132 more. This from a deeply religious man who applied for, and was denied, exemption from the military draft as a conscientious objector.

Most of the story, by a quintet of screenwriters that included John Huston, concerns itself with York's pastoral existence in Pall Mall, Tenn., right near the Kentucky border, and his transformation from hard-drinking ne'er-do-well to resolute man of the Bible. Director Howard Hawks focuses his camera lovingly on the hardscrabble landscapes and wood-plank shanties that make up York's community, where everyone is either a farmer or a vendor to them.

I enjoyed this section, especially the presence of ol' reliable character actor Walter Brennan, who plays the local preacher as well as owner of the local supply store. With wire-rim glasses and improbable black eyebrows, Pastor Pile gently tries to steer Alvin toward a church-going life, rather than hanging out with his drinking buddies, occasionally riding into town and shooting his initials into the tree in front of the meeting house.

Margaret Wycherly plays York's mother, a prototypical long-suffering woman of unshakeable values, who always believes in Alvin's inherent goodness even when it's hard for others to see. Widow York and her three children live on the rocky "topland," struggling to grow a decent crop every year. Both she and Brennan received their own Oscar nominations.

Things don't really change for Alvin until he runs into Gracie (Joan Leslie), a spunky local girl, and quickly resolves to marry her. Leslie was just 15 years old when they shot the movie, nearly a quarter-century younger than Coop, who reportedly gave her a gift of a doll on the set.

Alvin resolves to purchase some prime "bottomland" to entice Gracie, who of course loves him for who he is rather than material worth. Much of the middle section of the movie is taken up with Alvin working day and night to raise the money for a piece of land. He trades virtually everything of value he owns (except his rifle) to Mr. Tomkins (Erville Alderson) for a $50 down payment on the land, with 60 days to come up with the other $70.

With things coming down to the wire, Alvin enters a "beef and turkey shoot" contest, improbably pulling out six bullseyes in a row -- one bird, five targets -- to win the rest of the money. Only then he finds out Tomkins has broken his word and sold the land to Zeb Andrews (Robert Porterfield), the local equivalent of a "snooty rich kid," and also a competitor for Gracie's affections (or so Alvin thinks).

His dreams of having his own marital homestead dashed, Alvin seems destined to go down a dark road that will lead to murder. But during a thunderstorm on the way to revenge, lightning strikes his rifle, turning it into melted taffy. Alvin and his mule are struck senseless but unharmed, which he takes as a sign from God. A montage or two later, and he's teaching the Bible to Sunday school classes, just in time for war to break out.

Alvin's military commanders are initially suspicious of his country bumpkin routine and aversion to taking another life. He and the captain actually get into a bit of a Bible quote-off, each reciting verses that buttress their argument about the Lord's attitude on killing. After the C.O. grants Alvin furlough to go home, perch in the hills and ruminate upon the matter like an Old Testament figure, they essentially agree to disagree, taking the chance Alvin will perform his duty when the time comes.

And we know how that turned out.

"Sergeant York" is a cracklin' corn piece of enthusiastic patriotism, though not a mindlessly jingoistic one. It takes the time to get inside the head of a hero who was reluctant to fight, even though it would seem to be something he was put on this Earth to do.