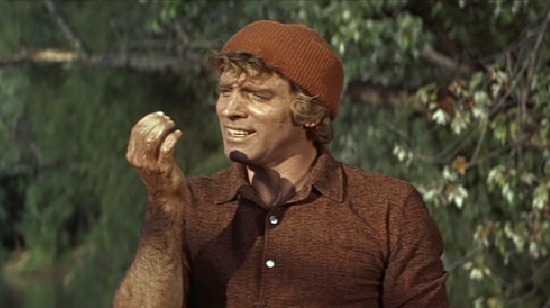 Usually when a movie star gets big enough to be in charge of their own films, the resulting pictures tend to be vehicles for them to portray larger-than-life heroes who bestride the globe like a colossus.

So it's interesting that in "The Kentuckian," the first of only two movies he ever directed, Burt Lancaster plays an unsophisticated common man who frequently finds himself the brunt of ridicule and misfortune -- losing the skin off his back, both figuratively and quite literally.

He plays "Big Elias" Wakefield, a rustic son of the Kentucky hills who is on the run -- though he eschews those words -- with his son of about 10 years, Little Eli (Donald MacDonald, who had a short run as a child actor with just three years of credited roles). It seems the Wakefields and the Fromes are the Hatfield and McCoys of the Bluegrass State, carrying on a war of dark deeds so long and bloody, the enmity has engendered its own bit of well-known verse.

Though it's never directly stated, it appears Elias killed a Frome in some sort of dispute, and lit out for Texas to escape his troubles and find some elbow room. An apparent widow (again, we're left to surmise), Elias is an expert hunter and tracker who has little ken when it comes to city life -- which, in 1820s Kentucky, means any collection of shanties where more than a dozen people congregate.

His true home is in the woods, his faithful hunting dog Pharaoh chasing after foxes, their meals whatever game they can catch or shoot, and their bed made by shuffling together a pile of leaves. Lancaster's wide face beams with smiling pride in the outdoor scenes, while a stoic frown overtakes him when they must go into town for supplies or whatnot.

Elias carries the Gideon Horn -- which is also the title of the novel by Felix Holt upon which A.B. Guthrie Jr. based the script -- a massive bone hunting horn that he uses to call Pharaoh back from the chase. Little Eli often bears the horn for him, a totem of their untamed heritage, and tries unsuccessfully to blow out a note himself. When he's finally able to, that means he's become a man, Elias says.

Troubles befall them in myriad form. Elias has the princely sum of $235 saved for their trip, mostly to pay for the ferry ride down the Mississippi River to New Orleans and the ship to Texas. But in town he runs afoul of the local sheriff, who sicced his dog on Pharaoh and didn't like when it lost the fight.

Thrown in jail for resisting when the constable made to shoot his dog, Elias is helped escape by Hannah (Dianne Foster), a local "bought" woman -- aka an indentured servant -- who works for the pub owner in virtual slavery. Little Eli insists she come along with them to Texas, and it seems a nice little domestic group has formed.

But the sheriff and bartender catch up with them (too much sleeping in the leaves, I guess) and demand all their money in bribe to let them go.

Elias had hoped to stop off to visit his older brother, Zack (John McIntire) and his wife, Sophie (Una Merkel), in the riverside village of Humility. But the lack of funds forces them to hole up there for a few months so they can work up a grubstake. Zack's stated intention is to tame Elias and turn him into a businessman like himself, running a trade depot that deals in tobacco, furs, etc.

Sophie takes an instant dislike to Hannah, seeing the lines of affection forming between her and Elias, deeming a "bought girl" as socially unfit to join the family. Hannah takes up working at the local bar run by Stan Bodine, the resident dandy/bully played by Walter Matthau. He has his eyes set on the schoolmarm, Susie Spann (Diana Lynn), so when she takes a shine to Elias that sets up the inevitable conflict between the two men.

Things do not go well for big and little Eli in Humility. The latter can't abide being cooped up inside a schoolhouse all day long when there's sunshine, trees and a great river to enjoy. Elias even lets Aunt Sophie tie up Pharaoh, which breaks both the boy's heart and the dog's spirit.

Elias is mocked by the townsfolk for his buckskin clothes and quaint ways. The derision grows to a fever pitch when he finds a huge pearl while harvesting river oysters. He consults a traveling salesman, Ziby Fletcher (John Carradine), impressed by the man's eloquent speechifyin'. Elias is cagey enough to know the (almost literal) snake oil shyster is a fraud, but figures someone that learned can clue him in where to get a good price on the pearl. Little does he know freshwater pearls are worthless compared to the saltwater kind.

Seeing a chance to secure his place in town by kowtowing to Bodine, Fletcher makes up a story about former President James Monroe being the biggest collector of river pearls in the land. Elias writes a letter to the ex0president, paying four bits in postage. The ruse sprung, the menfolk all enjoy a good laugh at Elias, while little Eli endures taunts by schoolchildren: "Your pa is President Pearl!"

Undoubtedly the most famous scene in the movie is the showdown between Elias and Bodine. It's initiated when Bodine sends his son to pick a fight with little Eli -- much the same way that sheriff sent his dog after Elias' -- and the boy is bloodied by a makeshift whip of rope. The boys are separated and the fathers take up their places, with Bodine wielding a real whip against the unarmed Elias, who is soon cut to pieces. He finally prevails, but only when Hannah surreptitiously intervenes to trap Bodine's whip under her wagon wheel.

I also enjoyed a jaunty little gambling scene aboard the steamboat Gordon C. Greene -- the same one used in "Gone With the Wind." Elias makes a show of his big bag of gold (actually Zack's money) to pass himself off as a rube, conning the con men by placing some smaller bets in conjunction with the experienced gambler demonstrating the game of roulette.

The idea is to lure in the sucker by showing him how easy it is to win, but Elias knows the game is rigged and he will win as long as he mirrors the other man's bets. After winning $280, he, little Eli and Pharaoh are then chased around the ship by the gamblers, who instruct the pilot not to stop at Humility, so they're forced to jump for it and swim to shore.

The proprietor of the steamboat -- though not involved with the gamblers -- is Pleasant Tuesday Babson (John Litel), a colorful figure who's recruiting pioneers to help settle Texas. He takes an instant liking to Elias, seeing him as the perfect specimen for wide open lands. However, by this time Zack and Susie have gotten their claws into him, and Elias is determined to stay.

The story wraps, not entirely convincingly, with the arrival of two Fromes brothers to claim their revenge. Played without credit by Paul Wexler and Douglas Spencer, these are twin, grim specters, so lean and hollow-eyed they appear to have set aside all nutrition in their crusade. After the obligatory shoot-out, in which both Bodine and Babson are collateral casualties and Hannah against saves Elias' bacon, Hannah, Elias and Eli resolve on the spot to unite into a family.

It brings the film to an abrupt end, without even so much as a final pull-out shot of the trio riding the steamboat south toward their fate.

As a director, Lancaster gets lively, authentic performances out of his cast. He seems to have largely left the camera work to veteran cinematographer Ernest Laszlo, resulting in some picturesque scenes of the countryside and river. The film was shot almost entirely on location in Kentucky, and it shows.

"The Kentuckian" is a very atypical adventure story for its time. Elias Wakefield is an ordinary man who carries a rifle, but never even fires it once in the course of the picture. He largely looks to avoid conflict, and when he does resort to battles of fists or wits, he always comes up on the losing side -- or would, if it weren't for help from Hannah.

It would be interesting to see this film remade from her point of view. She's actually the one who makes everything good happen for Elias, and in that sense Hannah is the truest Kentuckian.