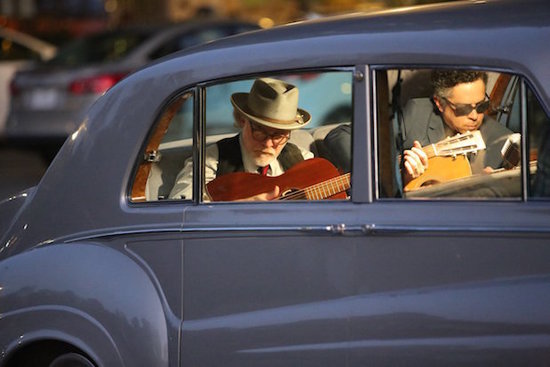 "Celebrity is the industrial disease of creativity."
--Mike Myers

"The King" is not your typical biographical documentary. Director Eugene Jarecki knows that the life and career of Elvis Presley are well-explored topics upon which he can layer in few surprises. So he takes a left turn -- both metaphorically and politically -- and examines what Elvis meant to us.

Few figures can boast such a deep, lasting cultural impact 40 years after their death. Presley remains arguably the the most iconic pop musician of the last century, or ever. In Bangladesh or Colombia, there are kids running around who were born decades after Presley died, yet could probably do a reasonable imitation of his "Hound Dog" swiveling pelvis dance if prompted.

As a framing device, Jarecki uses a unique approach. He somehow got ahold of Elvis' 1963 Rolls-Royce Phantom -- a loaner, I'm presuming -- and drives it all around the country, giving people rides as they talk about Elvis. Some are famous -- Ethan Hawke, Alec Baldwin, Emmylou Harris -- and others are regular folks given a chance to ride in the King's chariot. Some of them are musicians themselves, who play their own music or Presley's from the back seat.

Bluesman Leo "Bud" Welch offers this stunningly audacious assessment: "I heard Elvis Presley years and years ago. He had a style of his own, and I had a style of my own." I think Elvis would have appreciated the sheer gall of that.

We drive with Jarecki to Elvis' hometown of Tupelo, Miss., which continues to milk its most famous native son to this day. We visit the "official" childhood home on the white side of town, but when they go looking for the place the Presleys lived as one of only three white families in a black neighborhood, people aren't exactly sure which of the cookie-cutter shacks it is.

Around this point is when "The King" diverges from hagiography to cultural criticism. We talk to black artists who, like Chuck D of Public Enemy, are resentful of Elvis for appropriating a black sound and getting rich and famous off of it. Political firebrand Van Jones bashes Presley for remaining devotedly apolitical his entire life and not using his celebrity in service to a cause (presumably one in sync with Jones' own views).

We talk to old girlfriends, nightclub owners who knew Elvis during his bloated last years grinding out two shows a day in Las Vegas, and a key member of the "Memphis Mafia" of hangers-on and confidantes, Jerry Schilling. "Elvis was my best friend," he says. "I don't know if I was his best friend, but I know some days I was."

It's a compelling ride, as we drive down Route 66, through winter snowstorms and parched deserts, beautiful ocean-side vistas, exploring America and what it meant for Elvis, and what he meant to us. The Rolls has several bouts of mechanical troubles; at one point Jarecki turns his camera on his own pit crew boss, who tells him not only does he not know what the movie is about, he doesn't think Jarecki knows what it's supposed to be about.

He's got a point. Jarecki, no stranger to ardent lefty politics, lets the last third or so of the movie devolve into a wandering polemic, linking Elvis' descent into pills and money-grabbing to the rise of Donald Trump and his disgusting rhetoric. Many of the interviews were shot prior to the 2016 election, and several liberal folks -- James Carville and Alec Baldwin among them -- swear that Trump will never beat Clinton.

There's a desperate tinge to these pronouncements, ironic now of course, but this flavor becomes more pronounced and dissonant as the movie moves on. These are the end times, Jarecki seems to argue, because like Elvis our country always chooses the fast cash and the easy gig over staying true to ourselves.

"If Elvis is your metaphor for America, we're about to OD," says rapper Immortal Technique, laying out the film's theme as bare as can be.

Personally, I find this kind of talk to be juvenile poppycock. If your regard for America is swayed by the current occupant of the Oval Office, then I don't think you really understand the true spirit of the American experiment at all.

Still, I found the first two-thirds of "The King" to be an interesting and creative way to look at Presley's musical and cultural legacy. Even the last third, while indulgent, is never boring.

Here's a documentary that uses a portrait of Elvis Presley as a mirror for what Jarecki sees as the shattering American dream.