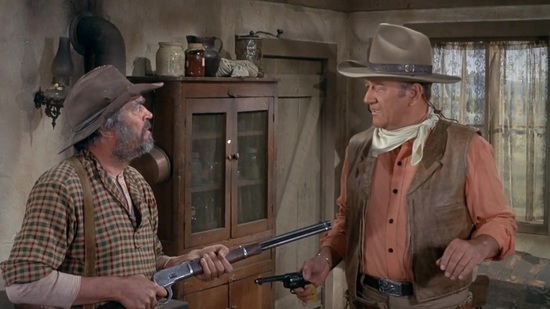 Even in 1970, "Rio Lobo" was something of an outdated relic.

It was the final film directed by Howard Hawks, made during John Wayne's post-"True Grit" period of diminishing returns, with only his final film, 1976's "The Shootist," really standing out in his filmography. (What, you don't recall "McQ" from '74?)

The following year he would make "Big Jake," another "last" picture for its director, George Sherman, which also featured a revenge/payback theme. That's actually a throughline in Wayne's final decade of films, as his characters generally react to the wrongdoing of others, rather than seeking out trouble like his younger cowboys would.

("Jake" and "Lobo" have been released together as a Blu-ray set, so I'll be featuring them next to each other in this series.)

Hawks and Wayne had of course paired up together before, for "Rio Bravo" in 1959, which was a deliberate cinematic retort to "High Noon" with a very similar plot, and for "El Dorado" in 1966, which was essentially a remake of the same formula with some of the actors around Wayne swapped out.

"Rio Lobo" has been called the third remake/response to "High Noon," which would seem to show the depth of how miffed Hawks and Wayne were at it. I don't really think that description holds water, though, as this is a light-hearted adventure story about former Civil War enemies teaming up to overthrow a corrupt sheriff and his rich landowner boss.

In this telling, Wayne and his fellows are the dangerous interlopers riding into the eponymous town -- and nobody's fretting about their coming.

The story is straight as an arrow: while seeking out the traitors who sold information to the Rebs during the war, former Union Col. Cord McNally (Wayne) follows the clues to the fictional Texas town, where everyone lives in fear for their lives of the brutal sheriff and his crew -- though not enough, apparently, for anyone to leave.

Of course, it turns out one of the deputies and the land baron were the traitors, so McNally gets to play the hero while getting his payback. His allies are Pierre Cordon, a French/Mexican Confederate captain played by Jorge Rivero, and Cordon's wily sergeant, Tuscarora Phillips (Christopher Mitchum, son of Robert).

The trio tangled at the tail end of the war, and it was actually the Rebs who killed McNally's beloved lieutenant while stealing a shipment of gold. But the good colonel figures those were acts of war performed in the line of duty, and they're soon sharing drinks and good cheer. He wants the pair who sold them the information about the shipments. The former Confederate soldiers know only the faces but not the names.

They also pick up Shasta Delaney (Jennifer O'Neill) along the way, who's a much more self-assured female than we're used to seeing in Westerns. She bosses McNally and Cordon around, not merely accepting the latter's romantic interest but actually directing it according to her whims.

Shasta gets a nice speech about what it's like to be a woman living on the frontier, constantly being pawed by men who think they have rights to her body. I kept thinking about how we never would have heard this sort of thing in a Hollywood movie even 10 years earlier. It plays as a prescient #MeToo moment by today's lights.

Her husband was killed -- he was a lout; she wasn't exactly sad about it -- and after some saloon work, Shasta hooked up with a traveling snake oil salesman, a kindly older gent who treated her like a father. But then they wandered into Rio Lobo, he was killed and she found herself being pursued by Deputy Whitey Carter (Robert Donner), an albino who is one of the aforementioned gropers.

Once they get to Rio Lobo, they find the sheriff, "Blue Tom" Hendricks (stalwart footballer-turned-actor Mike Henry), has a veritable army tracking everyone's moves within the town. They soon learn that Ketcham (Victor French) is the money behind the stink, forcing people to sell their land at a fraction of its value. He was formerly known as Sgt. Ike Gorman, when he was selling information to the Rebs.

Meanwhile, Tuscarora is taken captive by the sheriff, so McNally and his team head over to his father's place to recruit help. Played by famously googly-eyed character actor Jack Elam, the senior Phillips is a rootin', tootin' old hellion whose standard policy is to fire off his scattergun at strangers and ask questions later.

Soon the forces converge for the reckoning, which will involve a lot of shooting and taunts.

It's a good-looking, entertaining but rather disposable film. It does stand out for me in a few ways:
In his early 60s when they shot the film, Wayne still cuts an impressive figure. As in all of his later roles, he constantly wears a jacket or leather vest to try to hide his belly, and the longer toupee he adopted in the 1960s sits lankly on his head like a dead gopher. But Wayne still has that twinkle in his eye, the rapscallion smile, the stern voice that made many an ornery assailant take a step back all on its own.
John Wayne had one of the most remarkable film careers, a star for 40 years without ever experiencing a dramatic dip in his popularity. Sure, his last few rides around the trail were more nostalgia tours than anything else. But he deserved those last laps, and "Rio Lobo" is a decent send-off for one of the great directors.