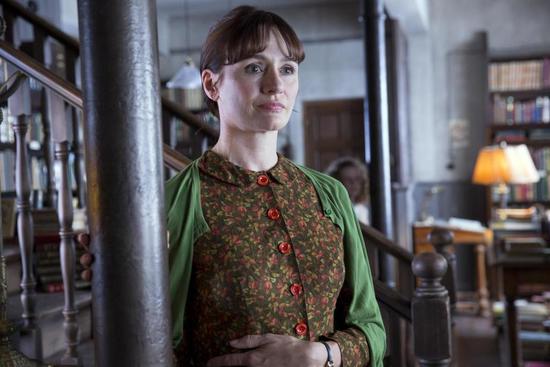 Oh, those repressed Brits! So impossible to say what they mean! How they must stammer and not look each other in the eye or express their true feelings! I’m not sure if ever a people got as much cinematic mileage out of having a large piece of lumber ensconced in their collective backsides.

Part "Remains of the Day," part "Local Hero" and with a few bits 'n' pieces of other British pastoral flicks tossed in, "The Bookshop" is set in a quaint little village where big things are happening beneath the workaday hustle and bustle.

Emily Mortimer plays Florence Green, a widower of early middle years who arrives in the lovely (fictional) seaside town of Hardborough in 1959. She lost her husband in the war, and now has the idea to open up the bookshop she’s always dreamed of. She buys a dilapidated old house in the middle of town, known as The Old House, fixes it up and is set to open her doors.

It seems that Violet Gamart (Patricia Clarkson), the local wealthy matriarch, has her own ideas for the house. She invites Florence to her latest grand party and suggests that instead she give the house over for a local arts center.

When women of Mrs. Gamart’s station offer suggestions, what they really want is acquiescence.

But Florence resolves to push on, and at first things go well. Books fly off the shelves, and she even takes on an assistant in Christine (Honor Kneafsey), who is about 12 and from a working-class family. Christine is very honest; if she were an adult we would call her blunt. She took the job making it clear she doesn’t clear for reading herself, and loathes boys. But the two get on marvelously.

Her best customer is Edmund Brundish (Bill Nighy), the town’s mysterious widower. He lives in a dilapidated great mansion, takes frequent walks and consumes books voraciously. Brundish does not actually come into town, at least not during the daytime. So Florence sends him books, three or four at a time, with the understanding that he can return anything he doesn’t like. None ever are, and he takes an especial liking to the works of Ray Bradbury.

Eventually the two have tea, to talk about Florence’s dilemma of whether to order 250 copies of “Lolito,” the controversial new book from Vladimir Nabokov. She carries through with the plan on Brundish’s recommendation of the novel. It causes a scandal in the bucolic town, which is all the reason Mrs. Gamart needs to launch a slow-moving but inexorable campaign against the bookshop.

Written and directed by Isabel Coixet from the book by Penelope Fitzgerald, “The Bookshop” is a keen observation of manners. The townsfolk act solicitously toward Florence, from the banker to her attorney, yet there’s a sense of predatory interest in their gaze. They’re not sure how to take a woman of independence and courage, and curiosity soon melts into malevolence.

Milo North, an indolent local bachelor played by James Lance, hangs around the edges of the story, appearing to pitch woo at Florence while also making certain to stay in the good graces of the Gamarts.

It’s a tender performance by Nighy, playing man of great sensitivity and pain, who reaches out after decades of solitude to another person through their shared love of books. It’s not exactly a romance, since he’s about 30 years older than her, but in a different time and place…

“The Bookshop” is a bittersweet story, one that celebrates the need for hopes and dreams while recognizing that they usually don’t come true. Or even when they do, other people have dreams that may conflict, which often leads to nightmares. True bravery comes from carrying on even knowing this.