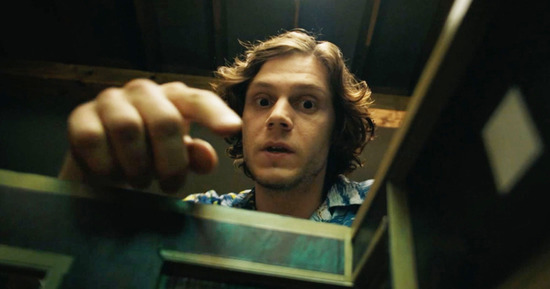 It’s the tale of one of the strangest robberies in history: four college students pilfering some very valuable books from the private library of Transylvania University in the early 2000s. Writer/director Bart Layton takes the audacious step of casting actors to portray the young men as they planned and carried out the heist, then intercutting this with interviews with the actual participants today, now in their 30s.

Warren Lipka (Evan Peters) is the ringleader, a headstrong athlete who doesn’t seem very interested in sports, school or much of anything. But he and dweeby art student Spencer Reinhard (Barry Keoghan) become obsessed with the idea of taking the books, valued at several million dollars. At first both think the other is serious, while they’re just playing around.

Soon it becomes clear, though, that this is more than just a passing fancy. They enlist Chas Allen (Blake Jenner), a rich doof, as their getaway driver, and Eric Borsuk (Jared Abrahamson) as their logistics expert. They track movements, plan the timing, prepare elaborate costumes as old men and even meet up with fences to buy the hot books.

As this is all going on, the movie cuts to interviews with the real men recollecting the events we’ve just seen. They often contest the validity of the movie version, saying it’s just Hollywood hokum.

The film starts out as fun ‘n’ games, but then a strange thing happens. We start to realize these are real men who made an audacious and incredibly stupid move, and it’s still affecting their lives to this day. It was essentially an impulse decision, in long form. They became so enamored of the idea of doing this thing, they never stopped to think if they should.

Entertaining and oddly affecting, “American Animals” is less a crime story than the tale of young men who discovered themselves through a bungled heist.

Bonus features are decent, and include a deleted scene, making-of featurettes, a gallery of photo stills from production and a feature-length commentary track featuring the director and cast.