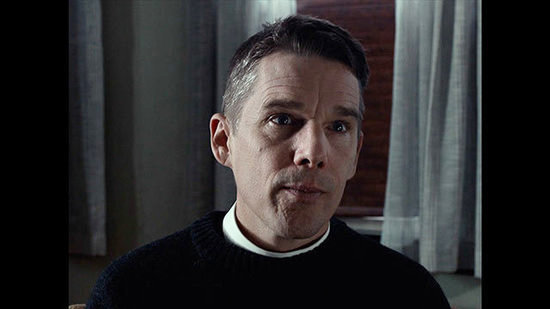 Ethan Hawke is quietly enjoying the richest period of his career. Alas, most of these revelatory performances have been in small movies few people saw: “Born to Be Blue,” “Maudie” and this effort from writer/director Paul Schrader. Hawke plays Toller, a middle-aged reverend at the titular church, a small, ancient place of worship in upstate New York.

“First Reformed” is a challenging but ultimately rewarding film. Not since Martin Scorsese’s “Silence” can I think of a movie that has treated the subject of religious faith with such devotion and a complete absence of condescension. Both are about clergymen having their beliefs tested and found, at least for a time, wanting.

Toller is more caretaker of a facility than minister to the faithful. Few people attend services at First Reformed, in part because it’s seen as more of a historical stop-off for tourists, and partly because Toller is clearly a man who’s struggling too much with his own doubts to allay those of others.

He gets a chance at redemption when he is approached by a young couple (Amanda Seyfried and Philip Ettinger) in crisis seeking his help. The husband is depressed and suicidal, obsessed with climate change, and Toller shares some of his own troubles in an attempt to relate. A former military chaplain, his marriage crumbled when his son enlisted -- with his encouragement -- and died in Iraq.

Instead of helping the young man, though, Toller finds himself swept up in the same fixation he has. This causes problems in his relationship with Reverend Joel Jeffers (a very good Cedric the Entertainer), who runs the nearby megachurch that props up First Reformed financially. They’re about to celebrate the church’s 250th anniversary, and an energy tycoon is funding the lavish ceremony.

Things go from there. “First Reformed” takes some surprising turns of the plot -- ones that I’ll admit left me feeling alienated from the movie at first. But the emotional navigation is true, anchored by Hawke’s wonderful performance as a man whose torment is the only thing left sustaining him.

This is not a film for everyone. But for those willing to be challenged and questioned by a movie, it’s as worthy a cinematic experience to come along in 2018.

Bonus features are modest. Schrader delivers a feature-length commentary track -- pity it did not include Hawke; this film would be a perfect conduit for an imtimate conversation between filmmaker and star -- and a making-of documentary featurette, “Discernment: Contemplating First Reformed.”