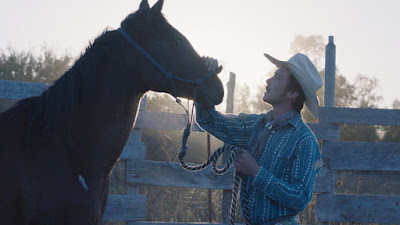 Some people I respect are calling “The Rider” the best movie of 2018. I wouldn’t go nearly so far. This film, about a young rodeo rider recovering from a serious injury, is often hampered by some rather amateurish acting. But it’s got a spare, powerful beauty and a compelling existential journey to explore.

Real-life family members Brady Jandreau, Tim Jandreau and Lilly Jandreau play son, father and daughter, respectively. It’s the first screen credit for each of them. The fictional Blackburn clan lives somewhere unspecified out West -- the film was shot in the South Dakota badlands -- and virtually everything they do is connected to the land and the animals upon it.

Brady is a rodeo bronco rider who has just suffered a serious injury. As the story opens his head is shaved and there are big staples across his skull. The doctors are telling him he can’t ride competitively ever again, but he doesn’t want to hear it. He continues to hang out with his rodeo bodies, and visits a famous former bull rider, Lane Scott (using his real name), who suffered an even worse mishap and requires full-time rehabilitative care.

Writer/director Chloé Zhao has given us a film that is unafraid to wallow in stillness and contemplation. Brady is an emotive presence despite playing a character who says very little and works to hide his emotions.

There’s not a lot of narrative. Brady comes close to getting back in the rodeo chute again, but thinks better of it. He starts to work with horses, showing an almost eerie skill in breaking wild ones into docile creatures. But then his symptoms, including a hand that clenches and won’t let go, become worse. It seems fate is conspiring to keep him away from even the simple joy of riding and taming the creatures he loves most.

Most of the supporting actors use their real names, and for most of them it’s their first time in front of a camera. For a few of them, it’s painfully obvious. I don’t make it a practice to call out amateurs for performing like amateurs, so I’m not about to start now. It hurts the movie’s impact, but not fatally.

“The Rider” is still a beautiful, tragic, worthwhile film about the price of loving something with everything you’ve got.