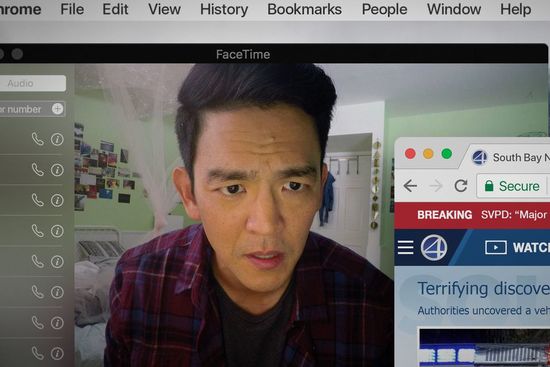 “Searching” may seem like a breakthrough movie, though it’s not. It’s a pretty good one, but it’s hardly the first mainstream film to take place entirely through the computer screens we use to chat, search the internet and connect with others. The horror film “Unfriended” did it four years ago.

Yes, the movie is just what it sounds like: the only shots of people we see are through their chat windows, or live feed television coverage of unfolding events. Otherwise, it’s a whole lot mouse cursors scrolling around clicking on stuff, opening up and windows and typing.

It’s essentially a mystery-thriller, with David finding out that he didn’t really know his daughter at all. Her mom (Sara Sohn) passed away two years earlier, and they’ve been stumbling forward without ever really communicating with each other about the loss.

At first David thinks Margot is just being a typical teen, forgetting to empty the trash and blowing off his voice messages and texts. But then he finds out she left early from the study group she was at the previous night, and didn’t go camping in the mountains as had been suggested.

He hacks into her email and social media accounts on her laptop, and is surprised to find that the Margot reflected there seems rather… sad and lonely. She doesn’t seem to have any close friends, eating alone in the cafeteria every day, and other kids only have vague impressions of her. She gets invited along to stuff mostly out of a sense of obligation to her mourning.

Eventually the police are brought in, and David is at first comforted by the presence of Detective Sergeant Rosemary Vick, a veteran in the missing persons department. She seems on the ball and determined. More clues appear, things grow hopeful then dire, and the case eventually becomes a media sensation.

It is rather interesting, and also depressing, to see an entire movie that plays out like the experience of sitting at your computer. Part of me couldn’t help wondering if any of the online platforms paid for product placement, or were shut out if they didn’t pony up. For example, Facebook and Instagram play prominent roles but Twitter not at all. Ditto for Venmo but not PayPal.

All of us are spending so much time creating and annotating these digital facsimiles of our own lives, like a funhouse mirror where we lose our sense of self in the many reflections. How much of what people see of us is only what we want them to see? And do we start to believe the stories we tell about ourselves?

“Searching” drags a little toward the middle, but speeds up for a twisty ending that’s like something straight out of an Agatha Christie novel. It just goes to show that, even if you use a lot of cool new tools, filmmaking is at its heart a very tried and true process.