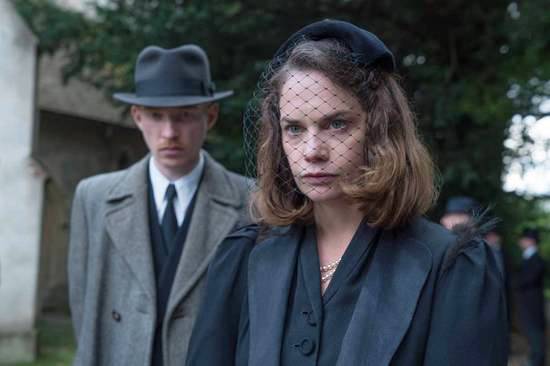 “The Little Stranger” is a very different sort of ghost story.

There are thumps in the night and strange scratchings on wardrobes and all of that. But it’s more a tale of psychological obsession than supernatural boogums. It’s a claustrophobic, deeply immersive gothic horror film that takes its own sweet time getting to the scares -- and even then they come sideways from where you expected.

Domhnall Gleeson plays Dr. Faraday, a youngish country physician who finds himself summoned for a house call at Hundreds Hall, the crumbling mansion of the noble but decaying Ayers family. He’s intrigued -- his mother worked there as a maid decades ago, and he himself visited the place for a ceremony as a young boy, a grand day that lives large in his memories.

Now, in the post-World War II years, Hundreds is looking more like Dozens. The only residents are the matriarch, Angela (Charlotte Rampling), and her children Roderick (Will Poulter) and Caroline (Ruth Wilson), plus a maid, Betty (Liv Hill), who’s barely into her teens. Every year they have to sell off more of the immense acreage to pay their taxes and keep the brandy cart stocked.

Roddy was in the RAF during the war and left badly scarred and crippled. Faraday -- no first name is every supplied -- has an idea to treat his limp with electrical impulses, and over the next few weeks something like a kinship forms. The mother is serene and superior, her funds meager but her entitlement in high reserves, and she looks upon Farraday as an uppity village boy who made good but will never be their equals.

Caroline is intriguing, though. Described as the smartest of the clan, she’s stuck caring for her brother and mother, not to mention trying to keep the house from falling down around them. While Faraday carefully plays the role of the family friend, Caroline sees to it that most of his attention falls on her. People in the community talk about the state of affairs, but without resentment.

This is a very interior performance by Gleeson, a chameleon-like actor who is quietly asserting himself among the finest performers of his generation. Faraday often wears a stern look, staring at people with a mix of keen observation and concealed longing. With his strawberry locks pasted against his skull and bits of fiery hair above his eyes and lips, he seems both very old and very young at once.

Without giving away too much, it seems the root of the family’s problems lies with the eldest daughter, Susie, who took ill and died not long after Faraday’s childhood visit. Angela becomes convinced that her spirit is still residing in the halls, and physical manifestations start appearing to confirm her suspicions.

Director Lenny Abrahamson’s last film was the mesmerizing “Room,” and some of that same sense of closed-in space is at work here, too. While Hundreds Hall is vast, it weighs upon the characters like a putrefying corpse in danger of suffocating them. Lucinda Coxon (“The Danish Girl”) wrote the screenplay based upon the novel by Sarah Waters.

I appreciated the dusky, warbling moods of “The Little Stranger,” though the film teases out the mysteries of its narrative to the breaking point, and then a little further. It’s mostly interesting as a psychological portrait of a man who is always helpful and polite, the very picture of a true English gentleman, yet seems to have a smudge on his soul he can’t quite blot out.