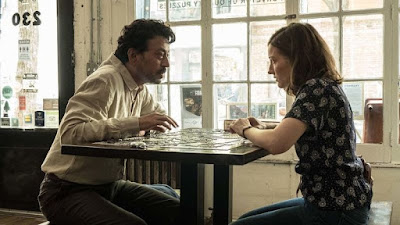 The great thing about jigsaw puzzles, someone says, is that the end you know you’ve made all the right choices.

Agnes (Kelly Macdonald), a mousy housewife from the New York suburbs, is very good at puzzles. Crazy good. Which isn’t to say that she’s made all the right choices. She’s living one of those lives of quiet desperations we’re always hearing about. Puzzles end up as being not just a distraction for her, but a path out of the drudgery.

Agnes is married to Louie (David Denman), a well-meaning lunk who runs an auto repair shop. They have one boy, Gabe (Austin Abrams) about to graduate from high school and go off to college, and another, Ziggy (Bubba Weiler), just out of school and working (grudgingly) at his dad’s garage because his grades weren’t good enough.

They’re Catholic, and really mean it. Agnes’ entire existence pretty much revolves around keeping the house in order, cooking meals and attending church functions. They don’t watch the news or go anywhere other than their lakeside cabin for fishing. When Gabe brings home a girlfriend (Liv Hewson) who says she’s a Buddhist, Agnes admits she doesn’t really know what that means.

Her relationship with Louie is like a well-cared-for car that has lost its zip, or never had any.

He’s a decent guy, but he treats Agnes like an appendage rather than a partner. The movie opens with a party happening at their house, with Agnes carefully preparing beforehand and serving everyone instead of participating. It’s only when she brings the cake out that we realize it’s her birthday party.

That’s her life: she gets a party, but she has to bake, serve and clean up the cake herself.

She’s always been a whiz at puzzles. A 1,000-piece one that would take most people days is just a quick snap for her. Agnes decides to take a trip into New York City to find some more challenging puzzles at a specialty store, and sees an ad for a champion seeking a partner.

Who knew: there are people who actually do jigsaw puzzles -- puzzlers, they call themselves -- competitively.

This brings her to the door of Robert (Irrfan Khan), the indolent champion. He’s rich, having invented something for a big pile of cash years ago. Now he just does puzzles because he’s good at it and he never really has anything better to do. After wowing him with how fast she burns through a complex puzzle, they agree to practice twice a week in preparation for the national championships next month.

Soon Agnes is living a double life, making up stories about visiting her sick aunt to cover her absences. But she misses a few church meetings, even forgets to make dinner because she’s so busy puzzling. This sends the entire family into turmoil, with Gabe dreaming of a gap year traveling in Tibet, Ziggy thinking about culinary school and Louie scratching his big ape head at how everyone’s gone bonkers.

Director Marc Turtletaub and screenwriters Polly Mann and Oren Moverman, adapting the story from an Argentine film, are less concerned with the perambulations of the plot than emotions honestly explored. Macdonald is understated and authentic, playing a woman of simple background who finds herself enthralled and scared by new possibilities.

The Robert character is regretfully underwritten; we get the sense between his meetings with Agnes that he’s done nothing but wait around for their next scene together.

The best interactions are actually between Agnes and Ziggy. They’re both misfits who want to fit in, but also want to explore their quirky longings. Weiler brings an anxious charm to the kid’s struggles.

I liked a lot of things about “Puzzle,” but the final picture never really came into focus for me. It’s an intimate portrait of life: messy, sprawling and craving organization into a more coherent story.