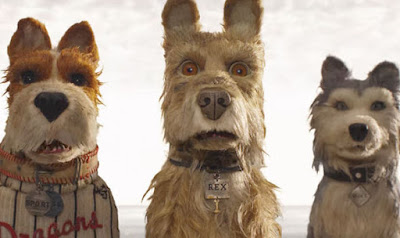 An animated film that is most definitely not for children, “Isle of Dogs” is the second foray into stop-motion animation by writer/director Wes Anderson. I run hot and cold on Anderson’s filmography -- adore “The Royal Tenenbaums” and “The Grand Budapest Hotel;” would require a lobotomy to get me to watch “The Life Aquatic with Steve Zissou” again -- so I’m happy to report I’m pretty warm on this one.

It’s a Japanese-themed story set a couple of decades in the future, when the Prefecture of Kobayashi has banished all dogs to the island where they dump their trash, which is soon renamed for its canine inhabitants. It turns out there was an epidemic of deadly flu attributed to the dogs some years back.

But one boy, Atari (Koyu Rankin), who is the nephew of the evil mayor, resolves to undertake a rescue mission to retrieve his beloved pooch. He crash-lands on the island and is helped by a pack of mutts, led by Rex (Edward Norton) and also including Chief  (Bryan Cranston), a grizzled fighter.

Meanwhile, back on the mainland an American exchange student (Greta Gerwig) is leading a rebellion of sorts against the mayor and the scientists he keeps under his thumb.

I should mention that the humans mostly speak Japanese, and no subtitles are provided. The dogs do speak in English, voiced mainly by American and British actors, which we are to understand is translated from bark.

It’s a weird, often wonderful movie that has no real point of comparison. You can’t point to another film and say, “It’s kinda like that.” “Isle of Dogs” isn’t for everyone, but for anyone who appreciates a bold splash of imagination, it’s the cat’s meow.

Bonus features are decent. There is a gallery of images from production and six making of featurettes: “Animators,” “Isle of Dogs Cast Interviews,” “Puppets,” “An Ode to Dogs,” “Magasaki City and Trash Island” and “Weather and Elements.”

Posted by Christopher Lloyd at 4:30 AM