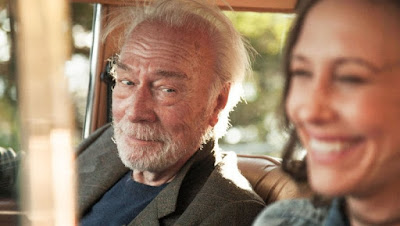 Just a short review today; the studio wasn't able to get me a screener until late Thursday afternoon.

I was a bit bored and bewildered by "Boundaries." It features two world-class thespians in Vera Farmiga and Christopher Plummer, playing a daughter and father at cross ends while trying to reconnect during a road trip. It features lots of talking but not much substantive sharing. Characters do things because that's where writer/director Shana Feste wanted a scene to go, not because that's how it would have organically led there.

Farmiga plays Laura, a harried and hectored mother to troublesome teen son Henry (Lewis MacDougall), an ostracized boy who has a penchant for drawing adults in the nude in sexual and unflattering ways. Laura's jerk boyfriend, like most male authority figures, has his male parts, uh, deemphasized.

Her dad is Jack (Plummer), a rapscallion who, at 85, is being kicked out of his retirement community for repeatedly breaking the rules. He was absent during most of Laura's childhood, and they only seem to hook up when someone needs something. Circumstances align that they each have a desperate need: Laura needs money to pay for private school to help Henry with his emotional problems, and Jack needs a ride to Los Angeles.

Jack says he can't fly because of a blood clot in his leg, but Jack says lots of things. Laura has learned not to invest a lot of hope for the truth.

So off they go, driving from Seattle to Los Angeles in Jack's vintage Rolls Royce, the trio of humans along with a few of Laura's collection of castoff dogs. We're not surprised when they pick up more along the way. That's who Laura is: she protects the weak because that's how she's felt herself much of her life.

Things go from there. It turns out Jack got his money from dealing pot, and the trip is largely an excuse to drop off product along the way. Most of customers are old friends, like Stanley, a hippie who never really left the commune. He's played by Christopher Lloyd -- the other one; or rather, I'm the other one -- who gets a hot tub nude scene a la Kathy Bates in "About Schmidt."

(Unlike Farmiga in "Up in the Air," I'm confident my namesake did not use stuntbutt.)

One inevitable stop is to see Laura's ex (Bobby Cavanale), who's sort of a junior version of Jack; he's just a little more honest with himself about his failings.

I should point out that this is one of those movies that stretches out a road trip that should take one long drive into about a week. By my guess, they actually only get about four good hours on the road per day.

"Boundaries" is one of those movies where if people ask you, "What was it about?", you really have no good answer. I was willing to cut this film a lot of slack just because I like the cast so much. But it fumbles at trying to manipulate our emotions, leaving us with a road trip picture that doesn't really go anywhere.

Posted by Christopher Lloyd at 10:07 AM