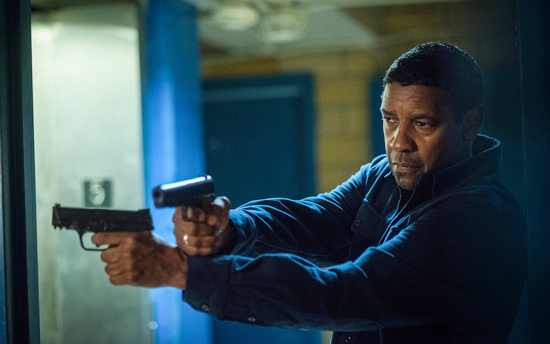 There’s a rote sense of sameness to “The Equalizer 2.” The original action/thriller four years ago starred Denzel Washington as an ex-CIA killer plying his skills for the benefit of random strangers -- the Good Samaritan with a heaping helping of chock-socky. It was (very) loosely based on the 1980s TV show, which starred a dapper Brit instead of a stern middle-aged black man.

If you liked the first one, you’ll probably find the second agreeable. There just aren’t many surprises or new revelations to recommend it.

Every scene starts for the proposition of, “How could this frumpy guy bumping up against senior citizen status possibly take out multiple bad guys each decades his junior?” And then he does.

It’s fun for a while. The whole film is like a magician performing variations on the same trick, over and over again. At some point you get tired of seeing the hare come out of the hat and want them to saw a lady in half, or something.

Director Antoine Fuqua returns, having paired with Washington on a number of films now over nearly two decades. The star and the filmmaker seem to have an innate sense of each other’s rhythm, so we don’t spend a lot of time worrying about the inner workings of Robert McCall. Instead, we feel like we just know him.

He’s lonely, a bit bitter. Bad stuff has happened in his life -- chiefly the death of his wife, Vivian. But he puts on a brave face and encourages those around him to be the best version of themselves. Robert is presumed dead by the CIA, and appears to move around every few years to start a new life. Strangely, he never changes his name, and nobody ever comes looking for him.

In the last film he was a stockboy at a hardware wholesaler; this time he’s a driver for Lyft. He tools around Boston in a black Chevy Malibu, picking up and dropping off people, listening to their conversations and acting as a voyeur in their lives instead of living one of his own.

Occasionally he hears something distressing, and decides to help. In the opening sequence aboard a speeding train in Turkey, he takes on a villain who has kidnapped his own daughter from his American wife. Later, he faces off with some young Wall Street types who have used a stripper poorly and expect Robert to ferry away the problem.

On the side he’s also helping an elderly Jewish man (Orson Bean) track down a valuable painting of his sister that was stolen during the Holocaust. And mentoring Miles (Ashton Sanders), a black teenager bouncing between his affinity for art and running with the wrong crowd.

The meat of the central story doesn’t get rolling until the 45-minute mark, and when it does it’s not particularly interesting. A CIA asset in Belgium is killed along with his wife, and made to look like a murder/suicide. Then those responsible set about “tying up loose ends,” which appears to mean killing anyone even remotely involved with the affair. This leads to more loose ends, and so on. Jonathan Scarfe is effective as one of the chief bad guys, the type of who sneers while he kills.

Mellissa Leo plays Susan, a friend of Robert’s -- his only one, really -- who still works at the CIA and helps him out with info. Bill Pullman is her husband, a doddering academic. Pedro Pascal plays Dave, Robert’s old partner who’s surprised to find out he’s still alive.

Written by Richard Wenk, who also penned the first movie, “The Equalizer 2” contains a whole lot of hand-to-hand combat, yet when it comes to storytelling it telegraphs its punches like an over-the-hill fighter with a huge windup.

The audience figures out who the chief antagonist is long before Robert does. It’s never a good thing for a super spy to seem slow on the uptake.