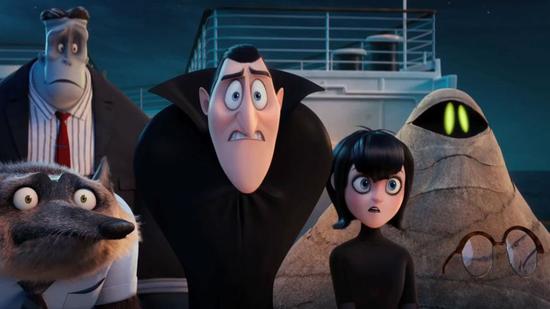 An interesting idea that turned into a rehashed sequel that now is a bona fide animation franchise desperately in need of a stake through its cold, black heart, “Hotel Transylvania” is the undead visitor that arrives every third year for an unwanted visit, thrilling your kids but leaving you groaning.

Or, slumbering: I fell asleep during the screening. Several times. Not for long, I think, but propriety requires that I disclose this is a review of only about 96% of the movie.

You know the setup: Dracula (voice of Adam Sandler) has traded in blood-sucking for running a posh hotel for monsters, who have come out of the darkness to live (mostly) in harmony with humans. To wit: his daughter Mavis (Selena Gomez) has married goofy human Jonathan (Andy Samberg) and produced a half-vampire grandson, Dennis (Asher Blinkoff).

Things are pretty hectic running a hotel and watching over a passel of monsters, who come in sorts of shapes, colors and sizes. So Mavis decides the family needs a vacation aboard the Legacy, an ocean liner catering to their kind. Stops include an underwater volcano and Atlantis, which has risen from the sea in the form of a tawdry waterlogged version of Las Vegas.

Dracula soon finds himself directing his killer gaze at Ericka (Kathryn Hahn), the human captain of the ship. He’s been a widower for more than a century, but is surprised to find he can still “zing” -- the monster term for falling instantly in love.

But Ericka has some not-nice hidden motives, which are demonstrated by suddenly scowling while her face is underlit with red light that appears from nowhere to let you know she’s thinking evil thoughts.

Mel Brooks plays Drac’s dad Vlad, an old-schooler who eventually came around on not biting people. He gets some of the film’s best laughs strutting around in a tiny bathing suit, proudly flaunting his 500-year-old body. The gaggle of witches are appreciative, though.

The heavy is Van Helsing, Dracula’s old nemesis who is still kept alive through a steampunk contraption that animates his head and hands, along with a few struggling organs in jars. He’s voiced by Jim Gaffigan, doing his best impression of Bill Hader.

There’s a lot of colors, and boingy action, and spontaneous dancing. They even revive a couple of tunes from the last movie; I guess the filmmakers didn’t want to shell out for another songwriter. There’s even a DJ contest late in the game where they dust off “Macarena” as the epitome of all that is good and positive. Well.

Kids will probably enjoy “Transylvania 3,” but for anyone over the age of 10 it’s a sack of garlic, a beam of sunshine and a wooden cross all rolled into one.